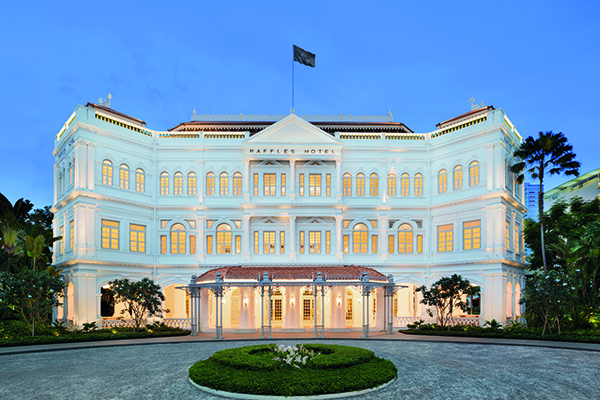 Following an extensive renovation project, Raffles Singapore is welcoming guests to explore its new look hotel. The restoration was designed to ensure that the hotel retained what is so special about Raffles – the ambience, the service, the charm and the heritage of the hotel. Guests can experience the hotel’s legendary service as they enjoy newly opened bars, restaurants and boutiques whilst exploring graceful courtyards and relaxing in cosy social spaces.
With enhanced comfort and splendour for the discerning traveller, guests can immerse themselves in the striking architecture and graceful service for that unique feeling of being somewhere very special in the heart of the business and civic district.
PREMIER HOSPITLAITY INTERNATIONAL spoke to Jon Kastl from Champalimaud Design about his involvement with the hotel’s renovation and the work undertaken.

How did you get involved with this project?
“Six years ago we were invited to submit a proposal for a competition and we were selected and won the competition to do the work.”

I understand the project has been quite a big renovation project. Is that correct?
“It has. Not only did we renovate the main hotel public building and all of the guestroom wings but we also renovated the shopping arcade as well, which rounds off a big block in the centre of Singapore.”

Where you given a brief for the project?
“The ownership didn’t really guide us from a design brief stand point. Instead, they guided us from an operational brief stand point in terms of what they wanted to achieve programmatically and they looked at us to generate the design. We wanted to be sympathetic to this iconic, historically important building while making it relevant, contemporary and speaking to today’s luxury travellers.”

What were the timescales on this project?
“We got involved about six years ago (2013) and designed and documented the whole project in about nine months. That followed a period of construction drawings which took several years to complete. It was then about a two year construction period on site.”

What are some of the design highlights of the hotel?
“One of the main things that we did, which is key to the hotel, is made the lobby a really socially dynamic space. The hotel had gotten a bit out of date and it wasn’t really attracting a nice mix of clientele so they wanted us to reinvigorate the space. Singapore is the most vibrant city in that corner of that part of the world and the hotel really needed to reflect that vibrancy. The main building now has a very activated lobby, which is not only a lobby lounge but is also a place where you can have tea in the afternoon and it is sandwiched between all of the food and beverage offerings in the hotel.  We also created a really lovely bar just off of the lobby which is something the hotel previously lacked.” 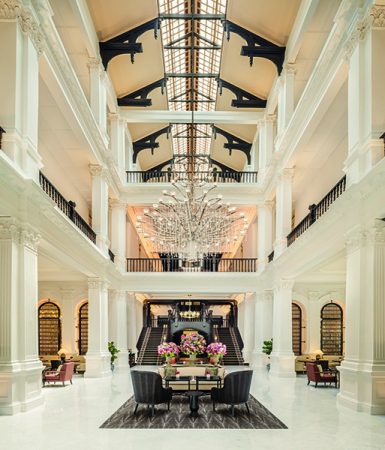 In terms of the bedrooms, the palette is quite neutral. Was that your design decision or did the hotel want that kind of style?
“The hotel is known for this wonderful white colour so we stayed very true to that British Colonial architecture, not only on the outside of the building but also on a lot of the interior spaces as well. In the guest rooms we relied on the furnishings, rugs and artwork to add colour and texture throughout, but overall the envelope is quite neutral.  In the rooms, it is all new construction so we took the rooms right done to the brick wall and rebuilt everything, apart from the floors which are all original.”

What has the feedback been like since the hotel has re-opened?
“We have had a very good response from both the media who have been involved and the clientele. Everyone is very happy with what we have done and I imagine that will stay the course.”

How important has this project been for you to work on?
“I have been doing this job for a while and I think professionally it is one of the highlights of my career. It is so wildly important, not only to the people of Singapore and that part of the world, but really to our industry as a whole. It is for sure one of the most iconic hotels in the world and we were honoured to be selected to do the renovation.  It is truly humbling and we don’t take these things lightly; it is serious work and it is important work so it has been very important to the firm.” 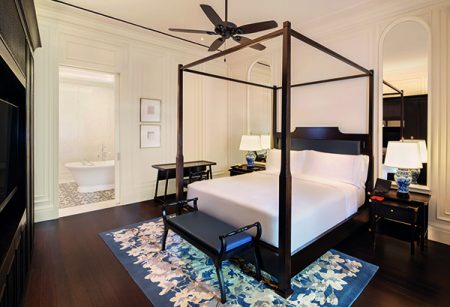