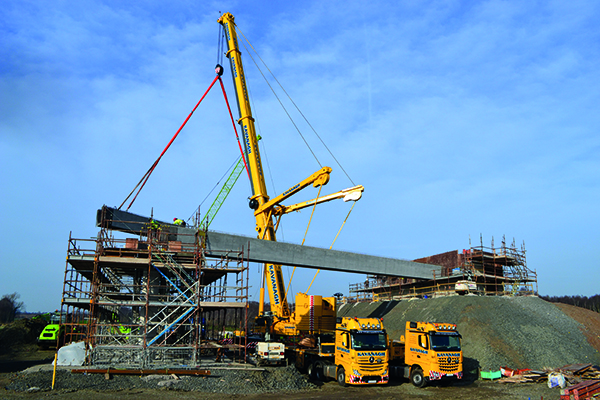 The Department for Infrastructure

The Department for Infrastructure is one of nine Northern Ireland Departments. The main responsibilities are:

Two projects currently being undertaken by the Department for Infrastructure are the A6 Randalstown to Castledawson Dualling Scheme and the A6 Dungiven to Drumahoe Dualling Scheme.

A6 Randalstown to Castledawson Dualling Scheme

The A6 Randalstown to Castledawson Dualling Scheme currently underway in Northern Ireland will see approximately 14.7 km of vital road upgraded.
Delivered by the Department for Infrastructure, the project will enhance a route used by 20,000 vehicles each day and address issues such as congestion at key times. A significant investment of £185m will strengthen links between Belfast and Derry/Londonderry. The long term benefits to road users and the local community will include reduced journey times and improved road safety.

David Porter, Divisional Roads Manager with the Department for Infrastructure said: “This project is on one of our key transport corridors and these corridors were identified in a document in the early 2000s called the Regional Transportation Strategy (RTS). The document was produced to support the Regional Development Strategy which was a plan for the whole of Northern Ireland setting out how it would develop over a number of generations.  That strategy included housing and industry development and the transport infrastructure needed to support those developments was set out in the RTS.”
In 2015 the contract for the project was awarded to a Graham/Farrans Joint Venture. A total of 14.7km of new dual carriageway will be constructed as part of the scheme. This will be done in two sections: 7.3 km from the end of the M22 at Randalstown to the Toome Bypass; and 7.4 km from Toome Bypass to the Castledawson roundabout. The project first started on site in June 2017 and will be completed in 2021.
Progress on the project has been very good and a number of significant elements are now open to the public. The first overbridge structure was opened on the 16 July 2018. The bridge carries traffic from the Ballynafey and Ranaghan roads over the new dual carriageway and it forms an important link for the local community between Moneynick Road and Staffordstown Road.

Due to a number of environmental factors, the project had to be split into two phases. As part of the route passes close to Loch Berg, which has National/International Environmental Designations on it, restrictions had to be put in place on the site to minimise the disruption to the swans in the area. This means that during the construction phase, contractors are not able to work during the winter on those sections of the road. Work will pause during the upcoming winter and will restart in the spring. Phase 2 is due to completed in early 2021.

The benefits of the project have already been felt in the local economy. During the construction phase, the scheme is supporting the construction industry and local jobs and is delivering a direct
economic benefit of £2.30 for every £1 of capital investment. So far, the project has also provided local employment opportunities to 18 education leavers / long term unemployed, 7 Apprentices, 16 Student Placements, 17 Work Experience Students and has assisted 4 University research projects. The site has been visited by local Schools, Colleges and Universities to see first-hand the construction works, with over 110 educational visitors to date. 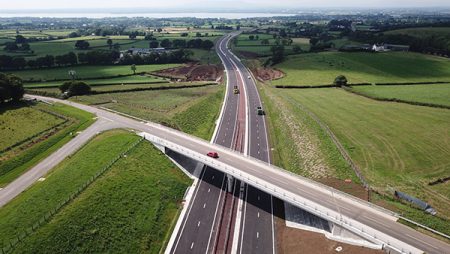 Construction on the project includes:

Being completed by a contractor consortium of Sacyr, Wills Bros and Somague, the scheme represents an investment of £220 million.
The main objectives of the investment are:

The A6 is a strategically important route as it connects the North West to Belfast and beyond. The existing road carries around 15,000 vehicles per day and with traffic levels continuing to grow, this very significant investment from the Department for Infrastructure will greatly improve road safety and journey times by reducing congestion.
The construction of the scheme is securing jobs in the construction industry, is contributing to the economic development of the region and will bring long terms benefits to road users and local communities.
David said: “We are currently at the ground works stage of the project and work on the structures has started.”
Works commenced on the project in April 2018 and is scheduled for completion by 2022.
David added: “As a civil engineer you want to be involved in building, constructing and delivering infrastructure projects which deliver benefits for people. Throughout my career I have been responsible for delivering lots of small projects so it is brilliant to be involved with something of this scale. The A6 projects are a very significant spending about £2 million per week which means there is a massive team involved, all working together to deliver the works.”

For more information on the projects visit: www.a6rcdualling.co.uk and www.a6d2d.com.