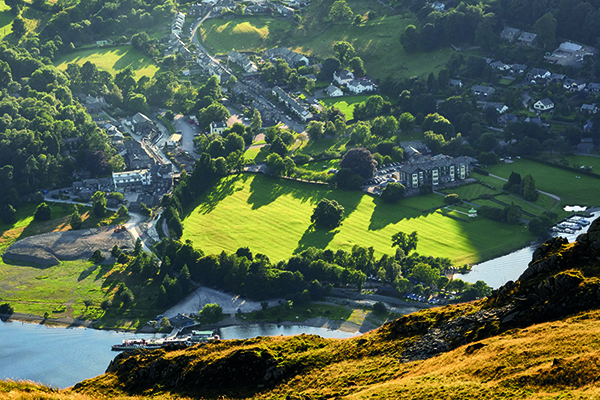 Flood defence works in the village of Glenridding, Ulswater, instigated after the devastating effects of Storm Desmond in 2015, have been completed.

Led by the Environment Agency, the flood defence works were completed in July 2019 following extensive construction work to reduce flood risk and better protect properties from a Storm Desmond type event – although the risk of flooding can never be completely removed.

Glenridding is a small tourist village at the southern end of the Ullswater Lake. The village lines the banks of the Glenridding Beck, with a single road bridge crossing the river. Historic flooding in Glenridding has been attributed to the accumulation of gravels and boulders in the channel during a flood event.

This reduces the capacity of the channel and Glenridding Bridge, which increases water levels in the channel and causes both the left and right banks to overtop. This mechanism of flooding was observed during the flood of December 2015. The winter storms brought exceptional rainfall in December 2015, which consequently caused river levels to rise. Due to the heavy rainfall, a landslide occurred upstream of the village, discharging a large amount of granular material into the river thus severely reducing its conveyance. This caused the water levels to further increase and it created blockages through the village and under the bridge. As a result, the river overtopped causing flooding to approximately fifteen properties. The banks collapsed at some sections causing structural damage to the riverside buildings and wall.

The principal contractor for the scheme was Mayson Bros.

The flood defence works have involved removing 18,000 tons of gravel from the channel and replacing the existing river training walls and constructing new flood defence walls to protect properties to the 1% annual probability of flooding. A new gauging station has also been added to provide a flood warning service to the residents of Glenridding.

The flood defences are made up of mainly cast reinforced concrete walls. The Environment Agency worked closely with Atkins Geomorphologist to gain a better understanding of the Geomorphological makeup post Storm Desmond and has implemented bed checks within the channel in an effort to stabilise the River Bed within Glenridding.

The project was successfully completed despite the challenges posed by the nature of the location. Due to the presence of Migratory salmonids, Glenridding Beck is designated as a site of special scientific interest (SSSI) and a Special Area of Conservation (SAC). This meant that work was only permitted from June to October with fish rescues carried out before each phase of works. Also due to the nature of the watercourse there were many days when it was not safe to work due to high water levels.

Central to the project was the collaboration between the Environment Agency and parties with specialist interests, including Eden District Council, Cumbria Highways, Lake District National Park Authority and local residents and businesses who were directly affected by the works.

The Environment Agency is currently investing a record £2.6 billion in building and improving flood and coastal defences across the country. The project, which runs from 2015-2021, will better protect 300,000 homes and thousands of businesses from the devastating effects of flooding and coastal erosion.