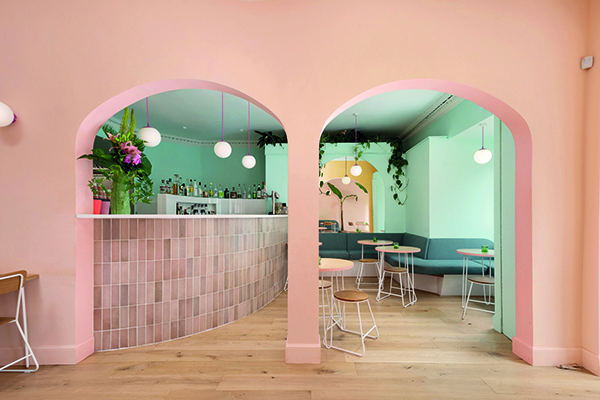 After five years at Elm Row, Bodega said goodbye to their Leith branch in search of much bigger and better premises to give their fans what they have been asking for. Already well known in the city for their tacos and margaritas, Bodega has a second branch situated at Leven Street, Edinburgh.

Speaking to PREMIER HOSPITALITY MAGAZINE about the move, Meredith Wilkie from Bodega, who also designed the new restaurant said: “We started the restaurant in a small 17 seater space just down the road from where the new one is now and we had been looking for a bigger site for a quite a while. In all honesty, it took ages for us to find somewhere that we liked. We knew we wanted to stay in Leith and when the site came up, and we knew it was the one that we wanted. After to six to seven months of construction, renovations and sorting out building permission and we are finally there.”

The new space has been described by Meredith as Miami meets L.A meets Mexico with an overall Miami Art Deco inspired style throughout the restaurant, alongside L.A funk and Mexico inspired bold colour blocks.

“I am really pleased with the way it has come out and I don’t think there is anything that I would really change about it. It was hard work but it’s great,” Said Meredith.

“Feedback has been good. I have heard nothing but good things and people seem to really love it. It is not just about making something beautiful, you have to make people feel like they want to have a good time so it was also about trying to make it feel comfortable, interesting and striking.”

Stand out features of the new restaurant include multi-coloured arches put in to help open up the space as well as combining the bar and service kitchen on one level to provide diners with a theatre style experience when they attend.

Bodega originally opened in 2013 with a mini menu and a big plan: to bring real tacos to town and change the way Edinburgh felt about Mexican cuisine. Their ethos is always to provide fresh, vibrant and innovative food. Already famous in the city for their tacos and margaritas, the Edinburgh taqueria serves fresh Mexican, Asian and American Inspired flavours from around the world, wrapped in an authentic corn tortilla.

The newest opening for Bodega serves their classic street food style tacos and is open on weekends from 11am serving a different range of brunch/lunch treats, including burritos and much more.

Meredith added: “This is a level up for us. For me and for the whole team, this is a level up. It is bigger, double the size of our other site and in terms of the number of people we can cater for, it means we can attract more customers.”

Bodega also has a downstairs space which Meredith and the team hope to open up and use as a private dining area. After that, the team will focus their attention on Lucky Yu, their Asian Fusion restaurant which now resides in Bodega’s former home on Elm Row.

“We kept hold of our original site, took Bodega out and opened Lucky Yu so I think we have plans to expand that side of things next. We have given love to Bodega and now we need to give that to Lucky Yu.”

For more information on Bodega and Meredith Wilkie visit: https://ilovebodega.com/ and https://www.meredithwilkie.com/