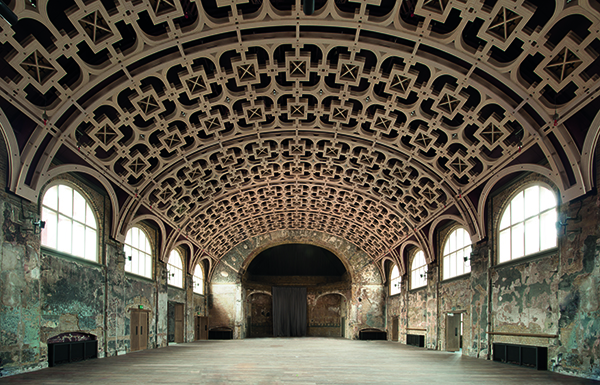 These projects are gradually transforming the entire building into a powerhouse of creative communal activity and an explicit record of the buildings vivid history.

Following a period of experimentation, a brief for more permanent work was developed. These projects include the creation of a new public outdoor courtyard performance space by selectively stripping back and patching in a disused light well, and the conversion of unused attics and rooftops for the organisation’s offices and garden. Cumulatively, these interventions have resulted in the reconfiguration of the entire interior to allow the possibility of multiple, interconnected performance, heritage and community uses, equipping the organisation for the next phase of its life. In the context of this narrative approach, the rebuilding of the building’s Grand Hall after the shocking fire that partially destroyed it in 2015 was able to be assimilated into the project as another, albeit highly significant, moment of the centre’s evolution and change.

The fire was in the northern half of the building, destroying the roof to the largest performance space. The original decorative plaster barrel vaulted ceiling was completely lost, but rather than replicating the lost ceiling, so the architects conceived a contemporary plywood lattice ceiling.

The new ceiling follows the curvature of the original and echoes the motifs in the plasterwork. It is much more porous and suitable for a modern theatre’s requirements. The new ceiling is constructed of three layers of 18mm thick birch-faced plywood and many apertures provide multiple rigging and lighting positions from the technical walkway built into the roof space above. Hidden banners within the roof space provide a variety of acoustic options.

The surfaces of the walls in the hall and surrounding corridors have been preserved. As the project has unfolded over the last 12 years, Battersea Arts Centre’s mission has evolved from a purely theatrical undertaking to become a far more wide ranging social project with access and inclusivity at its core.

David Jubb, Artistic Director of Battersea Arts Centre said: “We owe a debt of gratitude to an architectural practice who don’t just do design, they also do cultural change.”

The building now exudes a huge energy and a sense of surprise, delight and humour at every corner. This is astute conservation, in keeping with the spirit of the building and its function as an inspiring stage, all achieved on a challenging budget.