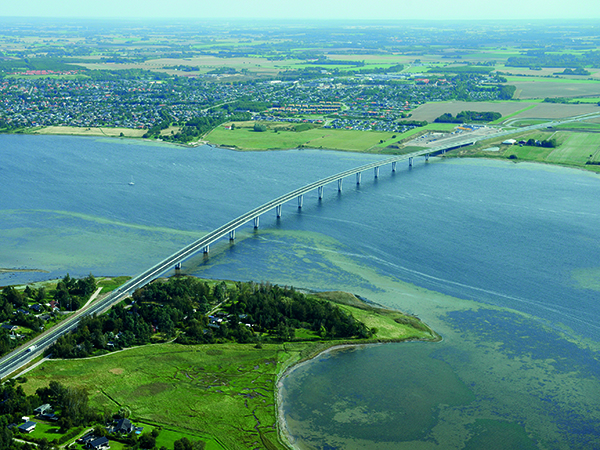 A long-awaited 1.36 km concrete bridge over the Roskilde fjord in Denmark has been constructed as part of a project to create the Frederikssund Link highway crossing the fjord, 45 km from Copenhagen.

The €133 million project, awarded in October 2016 to an RBAI JV of Besix, Rizzani de Eccher and Acciona Infraestructuras, included designing and constructing both the bridge (now named Crown Princess Mary of Denmark Bridge) and the 9km toll highway with four lanes (two in each direction) between Frederikssundsvej and Skibbyvej.

The scheme was carried out for the Danish Roads Directorate of the Ministry of Transport.

Congestion on both sides of Roskilde Fjord has become a problem, in particular around Frederikssund. The town on the east coast of the shallow Roskilde Fjord with a population of 16,000 lies about 45km north-west of Copenhagen. Its closeness to the Danish capital means it is becoming more popular as a commuter town.

The new road and bridge will relieve traffic on the nearby 1935 bascule bridge located further down the fjord, closer to the open sea. This bridge had become heavily congested – especially in the rush hour.

The works to construct the new bridge, located in one of Denmark’s most emblematic regions and the first segmental bridge to be constructed in the country since 1970, took 34 months to complete and finished three months ahead of schedule.

This bridge, with 15 spans between piles located 83 metres apart and 2 spans of 57 metres, was constructed using the progressive cantilever technique, launching precast beams. The foundations of the bridge consist of 52 piles, up to two metres in diameter and 50 metres long.

A total of 492 precast sections were used to construct the bridge using the joined segmental system with each segment weighing around 100 tonnes. These were precast in Poland by Mostostal, an ACCIONA subsidiary, and transported to Denmark by sea.

It ensured that construction works which stir up sediment are not performed during the growth period for eelgrass growing in the fjord. Sediment screens were used to prevent sediment from dispersing. The plant, therefore, receives sufficient light during the critical moment in its life cycle. In addition to the bridge over Roskilde Fjord, the highway has 11 other smaller structures including bridges, wildlife passes and a cycle lane, as well as a kilometre of retaining wall and a three-kilometre acoustic barrier.

Henrik Vincentsen, the Danish Road Directorate’s project director for the scheme said: “One of the main challenges of the project was the fact that the soil conditions in the fjord were pretty poor so we had to rely on piled foundations for the bridge – which was a big issue for us. This meant that extensive ground investigations were needed prior to contract procurement. We left it to the contract bidders to choose their own piling solution both from a design and a construction methodology point of view.”

He added that another important consideration was that the fjord is an ecologically sensitive area, which is home to a large number of animals and birds – including many protected bird species, and this set limitations on how the works could be carried out. For example, in order to access shallow water areas of the fjord it was necessary to construct temporary embankments which were removed after the works, with the fjord bed being reinstated.

He commented: “The new bridge is a an expressway, like a motorway but with no emergency lane, so bicycles, pedestrians and – importantly – slow-moving farm vehicles are not allowed. It greatly reduces travelling times and brings a significant benefit for the local community.”

The new highway and bridge were opened in September 2019. The inauguration was attended by the Danish Crown Princess, ‎Mary Elizabeth Donaldson, who officially opened the new infrastructure, renamed in her honour as the ‘Crown Princess Mary of Denmark Bridge’.

During the inauguration, the Danish Road Directorate highlighted the important work carried out by the consortium: “RBAI JV have since the tender process and during the whole construction period acted as a professional contractor for the employer.

“The collaboration over the years has been good and with full satisfaction. I would like to thank the representatives of the three companies in the RBAI V for their contribution to achieving such a tremendous result at the Fjord Link project. It is a spectacular project which will benefit to the Danish society for many years to come.”

Henrik Vincentsen concluded: “The main contractors did a good job. We were fortunate that they had a very collaborative approach, which was key to the success of the contract.

“This is an important project for the area because the municipality where the bridge and highway has been constructed is divided by the fjord and this created a bottleneck for many years. The local community have been awaiting a project such as this for more than 50 years.” 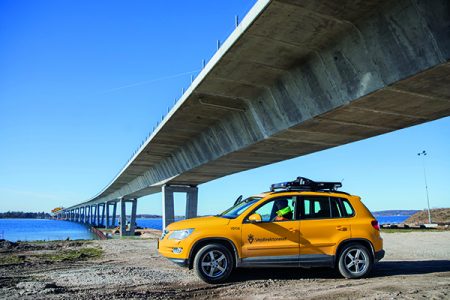