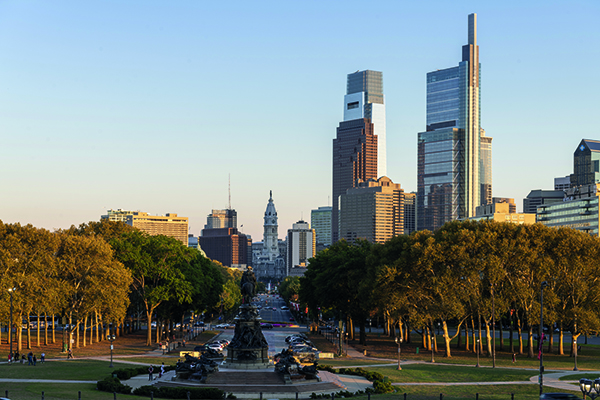 The 1800 Arch Street site is between the residential and social hub of Rittenhouse Square and the cultural district around Benjamin Franklin Parkway.

Located next to the existing Comcast Center, the new Comcast Technology Center rises 1,121 feet (341 meters) as the city’s tallest building.

Designed by Foster + Partners with L.F. Driscoll as main contractors, The Comcast Technology Center is vertically stepped, with loft-like work spaces and state-of-the-art television studios for NBC10 and Telemundo62, with the 12-story Four Seasons Hotel above.

Norman Foster, Founder and Executive Chairman, of Foster + Partners said: “The Comcast Technology Center brings together an unusual mixture of uses to create a new exemplar for the design of tall buildings.

“More than 80% of the workforce arrive directly by tunnels at the lowest level connecting to Philadelphia’s public transport system – a vital part of the project’s sustainable agenda. Working alongside Brian Roberts and his talented Comcast team has been a great collaboration and we are all delighted with the outcome.”

Reflecting Philadelphia’s great civic tradition of public spaces, the base of the building features a sheltered winter garden that foregrounds the main entrance. This ‘urban room’ combines the best elements of a lobby, a plaza and social spaces to create something completely new for residents and visitors to the city.

At the upper lobby level is The Universal SphereTM, a structure that houses a unique cinematic experience created by Steven Spielberg for all ages, exploring the power of ideas. The sphere is wrapped in a series of interlocking panels that create an infinite geometric pattern.

The Vernick Coffee Bar located alongside welcomes visitors and employees to the building, offering both a ‘grab and go’ and table service.

The service core of vertical circulation is split, creating a visual axis through the building to Comcast Center and a clear orientation spine. This central spine is articulated at the top of the building as an illuminated blade of glass, which extends 125 feet (38 metres) high to provide a marker on the skyline.

The building’s facades are animated by panoramic glass elevators and a series of 13 three-storey sky gardens, which rise to draw a continuous strand of active spaces through the building. The large, open floor plates are filled with daylight – each office level is equivalent in scale to twelve tennis courts. The interior is fluid and dynamic, with loft-like, highly flexible spaces designed to allow staff great freedom in choosing where and how they work.

The typical floorplate has been designed to optimise and control light levels through efficient glazing with high light transmittance and an automated blind system. Daylight penetrates into the interior spaces through triple height sky gardens. The building also features systems to ensure water efficiency with green roofs, waterless urinals and high-performance cooling towers.

Nigel Dancey, Head of Studio, Foster + Partners explained: “The Comcast Technology Center is like a city within a city, with a rich mix of uses that is embodied by its dynamic spaces – from the publicly accessible winter garden flooded with light, greenery and art for everyone, to the vertical loft-like workspaces in the sky which encourage innovation and creativity, three-storey skygardens with break-out spaces, restaurants and cafes, a state-of-the-art gymnasium, and a ‘town hall’ space that brings everyone at Comcast together.

“The drama continues with the Four Seasons Hotel at the top, featuring the amazing Jean-Georges restaurant that has unparalleled views of the city – rivalled only by the panoramic vistas from each of the rooms in the hotel.”