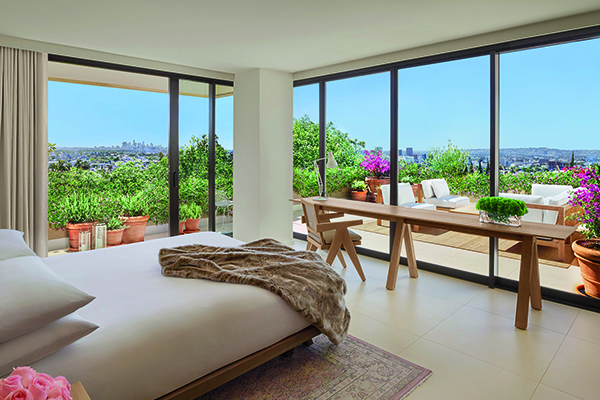 It features 140 guest rooms and 48 suites with 2 penthouses. The hotel also features 20 luxury residences and over 6,500 square feet of meeting and event space. The hotel boasts inspiring and sophisticated outlets which include a signature restaurant, lobby lounge, basement club, expansive rooftop pool and a 6-treatment room spa.

EDITION Hotels are one of a kind microcosms; featuring the best in service, food, drink and entertainment. Located in gateway cities throughout the world, these are hotels where people will find guests rubbing elbows with locals because there’s no better place to be in the moment. They are hotels that feel different because they make guests feel something; they are hotels that don’t act like the usual hotel.

Ian Schrager, hotelier, in partnership with Marriott International, brings the first true luxury hotel experience to the Sunset Strip, as well as the first West Coast location in the EDITION collection.

“It’s been 12 years since we began working with Ian Schrager, and The West Hollywood EDITION marks our 10th hotel opening together. Our organic partnership has melded the best of what each of us brings to the table. With Ian’s expertise and vision on this particular project, The West Hollywood EDITION is an oasis of sophistication and quickly becoming a part of the fabric of the city’s culture,” said Arne Sorenson, President and CEO of Marriott International.
Famed British architect John Pawson created the modern building of the hotel at 9040 West Sunset Boulevard from the ground up, employing dramatic proportions and rich materials such as the Western Red Cedar for the entryway and outsize front doors, and Italian travertine for the soaring lobby area. The entire three-story space appears to be cut from one stone, and it is designed to convey a sense of timelessness.

Upon entry guests can choose from the subterranean club Sunset to the 360-degree show-stopping vistas from the lush landscaped garden in the sky, to Michelin-starred chef John Fraser’s Ardor restaurant on the main level, along with a state-of-the-art multimedia performance and event space and a spa blending wellness, mindfulness and beauty.

Ardor’s greenery-filled garden was built for al fresco dining in the finest traditions of Napa, transporting guests from the hustle and bustle of Sunset Boulevard to an idyllic respite. Inside, its rich wood interior, echoing the timber screens and ceiling beams used in the other public spaces, ensconces guests in an intimate, energy-filled environment.

The Roof offers dreamy 360-degree vistas that stretch from the ocean of Santa Monica to the skyscrapers of downtown Los Angeles. EDITION is one of the few buildings that offers both bird’s-eye views of the homes nestled in the green hills to the north, and the city lights to the south, making it a must-see during the day and night, where it seats 130 in a soaring glass and beamed indoor-outdoor space.

By day, guests at The Roof can soak up the sun and views in chaise lounges beside the beautifully landscaped pool that sits atop a terraced deck adorned with wooden bench seating, mature trees and row upon row of terra cotta potted plants. The Roof’s menu offers Latin and tropical-inspired cocktails with Southern California flair, and a list of mezcals and tequilas are met with fresh, vibrant, and colourful California citruses.

The 140 guestrooms and 50 suites feature a soothing and sophisticated light neutral palette and whitewashed Siberian Larch wood throughout the spaces that reflect the unique lightness of Los
Angeles. Floor-to-ceiling sliding screens filter the sun while providing privacy, and these mimic the timber screens that surround the ballroom and Ardor. EDITION signatures such as freestanding tubs and Le Labo products are found here too.

The Spa at The West Hollywood EDITION is the first luxury destination in Los Angeles to weave together wellness, mindfulness and beauty from within, through treatments and experiences that embrace healthy lifestyles and ecological well-being. Service rooms include technology-forward treatments with sound and light, recovery therapies to restore the mind and body, and ancient rituals such as self-guided meditation.

Inspired by the Golden Age and built for the modern era, The West Hollywood EDITION redefines California luxury.

For more information about The West Hollywood EDITION, and to book your stay, please visit: www.editionhotels.com 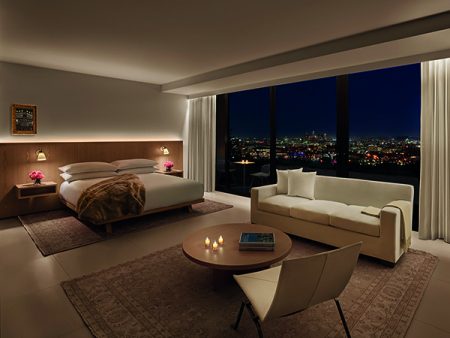