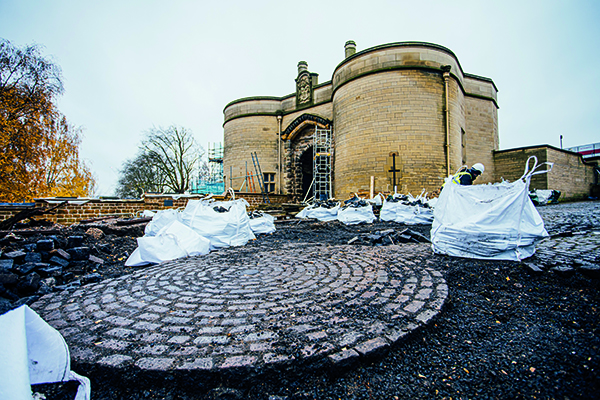 A total of £31 million is being invested to redevelop the Nottingham Castle site, including the Ducal Palace and grounds and the sprawling cave systems hidden within the castle rock.

Nottingham City Council made a commitment to completely transform the site in 2012 with the creation of a project team. With support confirmed from the Heritage Lottery Fund in 2014, plans were able to be put into action to achieve the council’s aim of creating an outstanding visitor destination.

This transformation is both ambitious and sympathetic. One thousand years of history lies ready to be re-discovered on a site rich in archaeology and human interest. A beacon of power, protest and rebellion throughout the centuries, Nottingham Castle will be revitalised to reflect the wealth of its history, the depth of its collections and the lives of the people of Nottingham.

Richard Hamblin, Project Director from Nottingham City Council, told PREMIER CONSTRUCTION MAGAZINE: “I suppose the castle has two established brands; one being Nottingham Castle and the other being Robin Hood, both of which are world-renowned brands. What the city wanted to do was create something so that when visitors come, there is something akin to what they are expecting in terms of Robin Hood and the stories of Nottingham Castle. The overview of the project is to address that need and demand in a more meaningful way than the city has been able to do previously, either because attractions have closed or attractions have become tired over time.

“The main aim of the project is to do some restoration on the site, update many of the galleries to more modern day requirements and include something about the stories of Robin Hood and the stories of the city, which weren’t on the site previously. It is a little bit about restoration and renewal but it is also an upgrade and update so we can make sure we are maximising the established brands of the city.”

The past few years have been a wonderful journey for the council from initial concept to what they believe is the blue print for a spectacular end product. Weaving their way through archaeology, listed buildings, ancient monuments, world-class collections, historical narratives and Hollywood legends (Robin Hood!) has been a challenging and incredibly rewarding process.

Richard added: “We are currently two thirds of the way through the base build programme, which is a contract that the main contractors G F Tomlinson are dealing with. The base build is mostly about the restoration of the site, building the new galleries and upgrading the galleries. We are also building a new visitor centre, which will welcome people on arrival. Follow on activity from that will be exhibition fit-out and client fit-out so there will be a period of around 6-7 months’ work where the base build has finished but other contractors are completing fit-out work. We expect to finish in about a year’s time and be open to the public in early 2021.”

The works timeline is as follows:

Richard continued: “In terms of work, the Ducal Palace is a building that was built in the 18th century. It has had a fire and is a listed building so an element of the budget has been spent on the roof, the façade and the masonry. The bits that will stand out to the public are the new galleries, including the Robin Hood gallery, and the gallery on the stories of Nottingham City, as well as the visitors centre, which will stand out as it is something visitors wouldn’t have seen before when entering the site. We are also looking to incorporate an adventure play area in the grounds of the site so we can extend the offer to appeal to the younger generation, that way we can attract the whole demographic. I think the adventure play will be something quite exciting for the younger visitors and to have that within the city centre will be a big change for the local population.”

As well as funding from the Heritage Lottery Fund, the work is being funded by the D2N2 local enterprise partnership, Nottingham Castle Trust and Nottingham City Council.

Richard concluded: “I think the expectations of the city are quite high and they are looking forward to seeing the work completed. It is something that has been talked about for many years so everyone sees the project as important. From a personal perspective, it is about creating a legacy for Nottingham. This project is creating something new and exciting with a legacy; bearing in mind that the castle has 1,000 years of history. It is about restoring and renewing that offer so it continues for another 1,000 years. It is part of the journey and why the project is important is because it continues that, rather than letting it decline and fade away. It is about renewing, restoring and reinvigorating that for the future ahead.”

How did you get involved with this project?
“As a business we have a long-standing relationship with Nottingham City Council and as the project is in the heart of our region, the entire team were all very keen to make sure we were involved in the restoration of this world renowned site with a history dating back a thousand years.

“I have personally worked for G F Tomlinson for five years on a variety of different projects from heritage works to building refurbishments to new builds. As soon as I heard we were bidding for the Nottingham Castle project I showed a very keen interest to be involved in such an iconic project, within a city I have lived in for 20 years. Heritage projects of this size within the region are rare so it was a great opportunity.”

Give us an overview of the project.
“G F Tomlinson’s works include the major restoration of the site using traditional techniques to preserve as much of the building’s original fabric as possible, with the addition of a state-of-the-art mechanical and electrical infrastructure. This is essential to enable the delivery of a world-class visitors’ attraction.

“We are currently delivering the first phase of the works, which effects the majority of areas on the existing site – with works to the Ducal Palace, Gatehouse, cave network and bandstand, as well as the redevelopment of the rest of the site to enable the installation of the exhibits and interactive elements of the project.

“Additionally, there is the build of a new oak clad visitors’ centre, which will welcome visitors to the Castle once re-opened.

“As well as the restoration works, the original layout of the galleries is changing to allow the stories of both Nottingham and its surrounding county to be told. This will include a new temporary exhibition area to provide visiting exhibits from other museums a space to showcase their collections.”

How long were you working on the project?
“For G F Tomlinson, the project began at the tender stage, where all parties worked collaboratively to ensure the project could be delivered within the outlined budget. My colleagues, along with Nottingham City Council, spent over eight months in detailed discussions to ensure everything had been considered prior to starting on site. As with every project, time flies and we have around five months remaining before the exhibition fit out and interactive elements of the restoration commences. Overall, the on-site works will take 18 months following the completion of the decant.”

What considerations did you have to make from a conservation point of view?
“The true extent of any conservation project is not known until the works begin. Throughout the project we have encountered a number of unknown factors ranging from the uncovering of rotten timbers to the failure of masonry which has been hidden behind lime plaster walls, and the discovery of unexpected archaeology.

“When unknown factors are uncovered, this can affect the critical path for the project. However, the conservation architect, structural engineer and our subcontractors, alongside the heritage and archaeological officers on the project, have always been proactive in finding a resolution straight away.

“In many ways this is a once in a lifetime opportunity to investigate and record the history of the site. The process of recording the many findings as works progress, and altering the design to suit the site, has become second nature to all parties involved. We have uncovered World War 2 allotment features, Victorian structures, hidden caves which were dug into the side of the moat, and substantial medieval Castle remains. I have found this fascinating and what may seem like a relatively small discovery brings real context to parts of the site; adding more detail to its rich history. It has been a real privilege for all of us working on the project to be delivering a new chapter of the Castle’s history.” 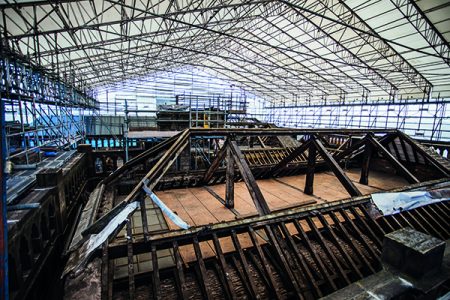 Established in April 2000, Empire Scaffolding (GB) Ltd specialises in the supply, erection and dismantling of scaffolding for both commercial and domestic projects.

Centrally based in Hucknall, Nottinghamshire, Empire Scaffolding is ideally positioned to deliver scaffolding services across the Midlands, including the areas of Nottingham, Derby, Leicester, Lincolnshire and Birmingham with quotations for larger works carried out throughout the UK.

The company has built a reputation for quality and an enviable scaffolding service. It supplies and erects scaffold for projects of all types and sizes.

Recently, the business has been engaged with GF Tomlinson on the redevelopment of Nottingham Castle. Having initially proposed a plattac scaffolding system thanks to its flexibility, Empire supplied and erected all of the scaffolding and any alterations needed.

The company takes pride in providing an excellent and reliable service, delivered by a highly skilled workforce. It is a member of both CHAS and NASC, which are some of the highest accreditations available in safety.