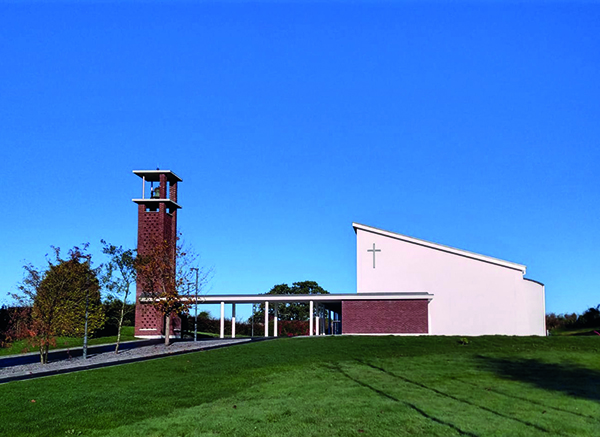 The refurbishment and renovation of a country church in Ireland has received national recognition at the RIAI Awards 2019.

Killyon Church in Enfield, Co. Meath, was originally constructed in the 1950s and, while structurally sound, was in need of a refresh. In 2016, local practice PG Architects was commissioned to carry out the redesign. The brief sought to address three key areas – a leaking copper roof, heating problems and consolidate the existing layout. It was crucial that the new look respected the work and local input from the past while bringing the building into the future.

Speaking to PREMIER CONSTRUCTION MAGAZINE Patrick Gilsenan, PG Architects Founder and Director, said:
“The original church was designed in the 1950s by a local architect, who also happened to live in the parish. A new parish priest, Fr. Michael Kilmartin, came in and he was driving proposals to renovate the building. Being a local parishioner they approached me and it went from there.

“The previous architect, James Fehily, is still alive and the church was one of his first projects as an architect. I went to talk to him before I started the redesign work, just to have a chat about the building.”

While externally the church remains largely unaltered and retains landmark elements, such as the bell tower, recognisable to locals, the interior has been significantly modified. Patrick continued:
“The church is out in the country so we were limited in terms of heating. It was previously heated by an old, oil boiler but we’ve replaced that with an efficient gas condensing boiler and a new heating system. In terms of the roof, we’ve stripped the entire copper roof and replaced it with a warm, insulated natural zinc roof.

“We then had to look at consolidating the whole building, reducing it from 5000 sq ft to 3500 sq ft. It was quite a large church with a long aisle and the altar at the head of the building. It was a seven bay building so we’ve demolished the top two bays and turned it 90 degrees. The congregation is now much closer to the altar. There are seven rows of seating curving and centred around the altar.”

New finishes have also been applied throughout, to be contemporary in style and respect the design and character of the existing building.

The project has helped to create a modern place of worship, with a warmer and more intimate feel than was previously the case. Recognition at the RIAI Awards – Killyon Church was a winner in the Conservation category – is a testament to the hard work of Patrick and his team, and their dedication to creating a stylish yet functional space.

Reflecting on the project’s feedback, Patrick concluded:
“Generally the local community wouldn’t be aware of architectural awards like this but it’s been made known and I hope they take some pride in it. For us, this sort of industry recognition is what you strive for. On every project you try to do your best with the design to deliver a good product so it’s great when that’s recognised by your peers. The fact that it’s a local project as well is massive.”