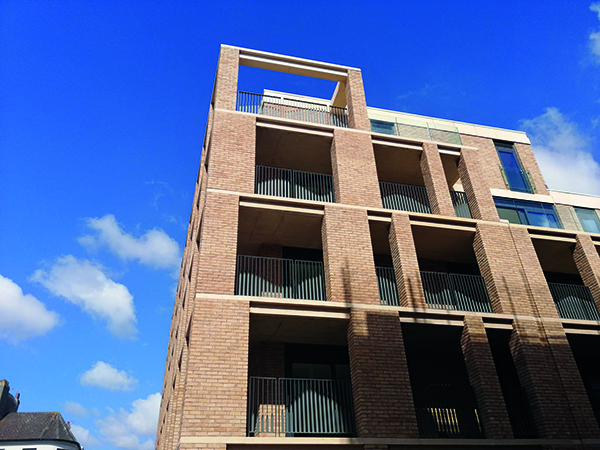 A development of 31 social housing units has recently been completed in Minden Place, Jersey. It has been developed and is owned by the Christians Together in Jersey Housing Trust. The ceremonial brick has been laid by its Chairman, Charles Thacker, and he said:

“I’m delighted to see this development reach such an important milestone just two years after the Trust purchased the property. Ed Le Quesne House is vitally important for St Helier, as it will help to increase the number of affordable housing units for residents in the heart of town.”

He explained further: “Our locations cater for people with varying housing needs. Ed Le Quesne House is designed primarily for people who have been living in various institutions and are now ready to move on to a more independent style of living. Facilitating this transition to independent living, tenants moving into Ed Le Quesne House will benefit from the services of on-site caretakers, who are on call 24 hours a day.

“It is important that the tenants still have a support network to call on, each tenant will have his or her own flat, and the caretakers are on-site to answer any queries they may have, respond to any unforeseen circumstances, help with maintenance requirements and foster a community spirit within the development.”

Having acquired the site in 2015, the Trust embarked on a series of negotiations with the Planning Department to develop a scheme which catered for its tenants’ needs whilst also delivering a bold architectural vision inspired by the Island’s heritage.

Mike Waddington of Waddington Architects came up with the concept for design. His undulating brick carving on the building’s exterior captures the islands passion for brickwork which is continued across the wave-form twisted steel balcony balustrades. As well as each apartment benefiting from its own private balcony, the building is also designed around a communal courtyard area. The building consists of a mixture of one- and two-bedroom apartments and each one has been finished to a high standard, with fitted kitchens (excluding white goods) and bathrooms.

“The site was very tight, which created a range of logistical challenges. One of the most nerve-wracking aspects of the job was that once the scaffolding was up, there was nowhere that we could stand back and view the full project. It wasn’t until the scaffolding came down that we could actually see the building in its entirety. From a construction point of view, we started off with a completely blank canvas. Because of the site’s close proximity to neighbouring buildings, and the limited access, planning was a priority throughout the project. Deliveries had to be undertaken at certain times to minimise disruption to road users and neighbouring residents and businesses.

“It was my first construction project in Jersey, as I moved to the Island in January last year, and it was a privilege to lead a team working on a development which will give so much to the community,’ he said. ‘The team at the CTJ Housing Trust were brilliant, and very easy to work with, and it is a project I feel very proud to have been involved with. The challenges we overcame during the build process really highlighted the strength of the team, and I also have to recognise Colin Barrett Builders, who did such a great job with the brickwork.”

Paying tribute to those living and working in Minden Place, he added:

“I have to say a big thank you to the Parish of St Helier, and the residents and workers in the area, who have all been very patient and supportive of this project.”