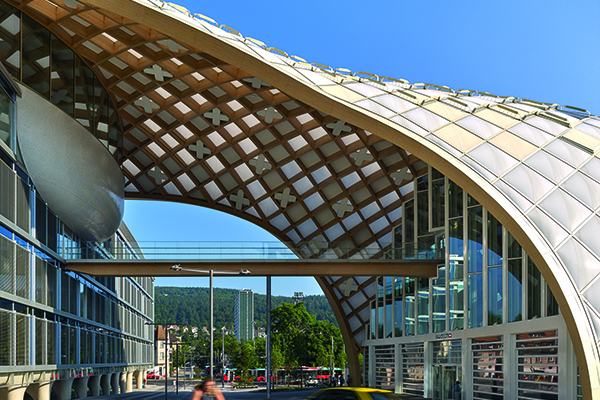 The Swatch and Omega campus is a monumental timber building project, comprised of three buildings: The Swatch headquarters – Swatch’s multi-storey office space; The Omega Factory – the production centre of Omega watches; and Cité du Temps – the Swatch and Omega museum and conference hall. The buildings share a design language, material palette, and environmental ethos, reflecting the unified brands of Swatch and Omega while expressing each building’s individuality through contrasting structural forms.

PREMIER CONSTRUCTION MAGAZINE spoke to architect Taro Okabe from Shigeru Barn Architects about the project in a bit more detail.

How did Shigeru Barn Architects get involved with this project?
“We were invited to a competition which involved seven different architects. We were then awarded the project following that competition.”

Where you given a brief for the project or was it an open brief?
“There was a detailed brief from the client but we didn’t necessarily follow it one to one because we had some questions about what was asked. We then proposed some alternatives and our actual proposal was an alternative to what was asked by the client. For example, the Swatch building which looks like a Snake was originally proposed as three separate buildings but we wanted to combine it into one building and cover it with one big roof. We even extended the roof to the Omega site and the street running under the roof is a public street.”

What where the timescales on the project?
“The competition started in January 2011 and the inauguration of the site was 3rd October 2019.”

Have you heard what people think about the site yet?
“This building has a very particular design and quite often there are objections with something like this because people will either like it or they won’t. If you go back to 2012 when we launched the project, the client issued a press release and one of the newspapers surveyed the sites neighbours and 80% of them were positive about the design.”

What are the stand out features of the project?
“All three buildings are timber and all three are built in a slightly different way. Even the Omega buildings, which are two rectangular shaped buildings, are different structural systems. Overall the roof is the biggest stand out feature. It is 11,000sqm of timber roof structural system with over 4,000 pieces of wooden elements which are all unique.”

What where the difficulties or challenges with the project?
“The challenges were mainly focused on the Swatch building. The roof looks like a grid shell and this is something that already exists but what we have done is integrate the building services, including sprinklers, air pipes, cooling and heating pipes and electricity – everything is integrated in the structural element. We have done a cut out in the structural element and have hidden those things. It might not be 100% but most of them are hidden in the structure. We have therefore ended up with a structural element which has precise cut outs to accommodate the building services. The coordination of this was extremely complicated and took a lot of time but the end result looks simple and clean.”

How important has this project been for you to be involved with?
“It is an important project because as far as I am aware this is the biggest timber construction ever built in our office and it is said that if you put all three buildings together, it is the biggest timber complex in the world. These days there are a lot of new timber structures coming up but at the time when I did research, all three of the buildings created the biggest in the world.”