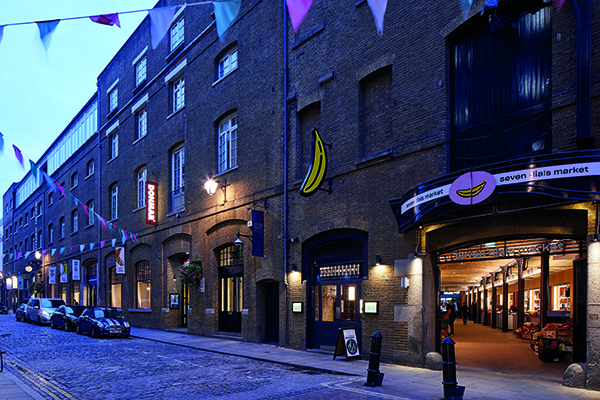 Street food pioneers KERB have opened their first-ever permanent home following the transformation of a historic warehouse in the heart of London’s West End. Occupying 24,000 square foot, Seven Dials Market is the new all-day destination packed with 25 independent food businesses all with roots in the city’s streets and markets, alongside a bar and bookshop that support KERB’s dedication to all things tasty in London.

The arrival of Seven Dials market breathes new life into Thomas Neal’s Warehouse which, when built in the 19th century, was used to store cucumbers and bananas. The Market is divided into two distinct areas; Cucumber Alley, an indoor lane of specialist London producers, and Banana Warehouse, home to an array of renowned street food traders and brand-new restaurants. It marks KERB’s first permanent home since it began driving change in the capitals food industry in 2012.

Once visitors have explored all that the ground floor has to offer, they delve deeper into Banana Warehouse and discover the incredible street food being cooked up on the downstairs level. Whether you’re in the mood for ‘like Wagamama on acid’ Raman from Nanba, Chinese comfort food by YIN or INK’s Fritto Misto platter, there are dishes galore in the new Seven Dials Market. Joining the many KEB alumni at the market, Truffle serve up a ‘7 Dials Burger’ with seven cuts of meat, including pigs head, tongue and bacon, as well as Yum Bun who have created the Bao-Wow as a Seven Dials market exclusive – a Chiang Mai sausage in a soft bao bun. Other traders include Strozzapreti, the new pasta restaurant from the team that founded Franco Manca and Venezuelan fried chicken experts El Pollote.

Market Bookshop
As a space for entertaining London’s food fans, as well as feeding them, Seven Dials Market includes a one of a kind bookshop dedicated to showcasing London’s food, drink and culture in literature. Market Bookshop is run in collaboration with world-renowned travel bookshop Stanfords, who have been trading in the Coven Garden area since 1853 and will stock over 400 food, drink and urbanist titles, with new books added to the collection each month. By night the Market Bookshop turns into a hireable private dining room, as well as hosting a schedule of exciting Seven Dials Market events.

Petra Barran, Founder of KERB said: “After seven years of creating and supporting a community of food traders to thrive on the streets of London, we are incredibly excited to be taking the next step for KERB. Seven Dials Market has been a long standing dream of ours and a complete labour of love for me and all the team. Our ambition is to build not only a home for excellent, independent food businesses to grown, but a welcoming, open space for everyone to enjoy a big slice of London.”

Julia Wilkinson, Group Restaurant Strategy Executive at Shaftesbury said: “Seven Dials Market’s fantastic line-up of 25 independent F&B operators adds an exciting dimension to Seven Dials as one of the West End’s leading locations. It has been great working with KERB, whose rejuvenation of the historic Thomas Neal’s Warehouse reflects our strategy of creating special places for people to enjoy. We are confident the combination of operators, the division of the space into different areas, such as Cucumber Alley and the Market Bookshop, each providing their own unique experience, will bring something quite different to not just central London, but the F&B sector more generally.”