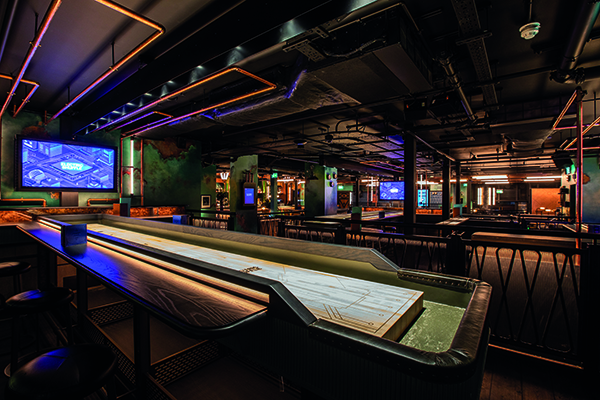 Having revolutionised the way the UK plays darts through the award-winning Social Darts concept, the co-founders of Flight Club have turned their attention to a new social activity – Shuffleboard.

Electric Shuffle is the first activity bar of its kind, which opened on Friday 29th November. It promises to shake up the area’s nightlife and offer a new venue for team bonding sessions, private parties or simply a night out with difference.

Speaking to PREMIER HOSPITALITY MAGAZINE about the project, Alan Ellis of Ellis Design Studio, the designers behind Electric Shuffle, said: “We got involved with this project about nine months ago, however, we’ve been developing the concept with the client for about 18 months. The Studio has a long-running relationship with Flight Path, having also completed the £5.5m flagship Flight Club in Nova, Victoria in 2018 and the £4m Flight Club venue in the heart of Birmingham City Centre. The reaction to both has been phenomenal so we are thrilled to be involved in the client’s newest venture.

“From a creative perspective, the brief was fairly broad for this project. We felt, however, that exploring the heritage of the game and overlaying this with elements of a technical, industrial and electric nature, taking inspiration from the pioneers of electrical technology, in particular the work of Nikola Tesla was a great fit for the design direction.”

Like Flight Club did for darts, Electric Shuffle takes the core elements of shuffleboard and reinvents them for the 21st century, using unique technology to create a fast-flowing, mesmerising game which will have participants screaming with joy and watchers desperately waiting for their turn.

Visitors can step up to the shuffle table, which can hold up to 16 people at any one time, and take part in three different games, each inspired by a different Shuffleboard element.

Alan said: “The beautifully designed Shuffleboard tables have been completely re-envisioned to form a central focus as social hubs within the scheme. The tables feature a high gloss custom inlaid timber surface manufactured in the United States specifically for Electric Shuffle. The table has been painstakingly designed and calibrated after significant focus group research to ensure that it not only looks beautiful but works perfectly for guests and blends seamlessly with the vast array of technology discreetly incorporated within the design. Materials and lighting have been carefully selected to not only showcase the table as a key design feature but also integrate the gaming technology requirements.”

All that action demands food and drinks to match. Electric Shuffle offers a selection of craft beers and cocktails, alongside a seasonally inspired menu including sharing plates, show-stopping pizza paddles and special dishes.

“Since 2015, we’ve been on a mission to deliver exhilarating social experiences to as many people as possible. From a pipe dream in a Devon pub, to an ever-growing family of Flight Club venues, it’s been an incredible journey so far.

“Now it’s time for the next step; a surprisingly competitive, delightfully immersive and outrageously thrilling transformation of another traditional pastime. And we can’t wait to share it with you!

“Shuffleboard is an exciting mix of skill and chance and its rich, but sadly forgotten history made it the obvious choice for our next step. It’s a game which has captivated everyone from Henry VIII through to the village landlord and our modern twist will wow Canary Wharf,” said Electric Shuffle Co-Founders Steve Moore and Paul Barham.

Alan added: “This project has been very important for the Studio as we have been on a design journey with the client from the very inception. We have been involved in every aspect of the interior design, from the Shuffle tables and bar design to the custom-made lighting and bespoke ceramics and furniture, crafting and curating a design narrative which is individual, perfectly tailored and carefully considered for the client. It is always a pleasure working close with a client to create something truly special. 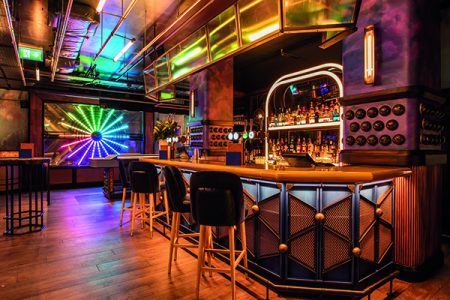