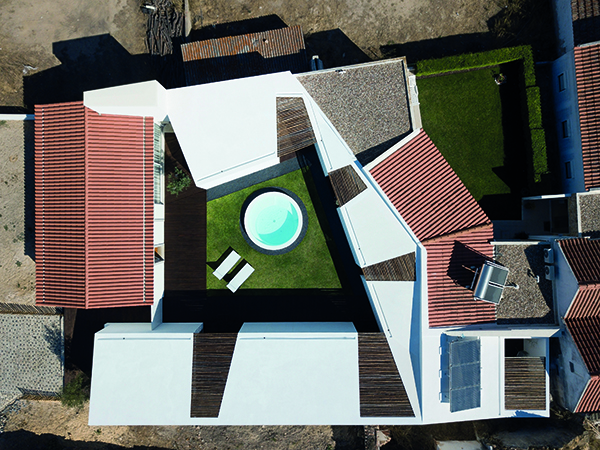 Built in 2018, Pátio do Meco, signed by Lisbon architect Fábio Ferreira Neves, is now a guesthouse with a quiet village presence. Located in the historical centre of Aldeia do Meco, Portugal, it had, for many years a single family housing and its barn, (built in the mid-twentieth century). Now, the new local accommodation consists of four suites, each with a private bathroom, complemented by the main space of the house. It offers a quiet stay in the centre of the village and it is close to several beaches and is perfect for a quiet getaway; it’s also only an hour away from the capital, Lisbon.

The project involved retaining the original identity and appearance of this typically vernacular complex; in particular the main house and its patio, situated in the centre of the complex. In the architect’s words, the project was a “recreation of the past in order to regenerate the future of the village.”

In more detail, the boundary of the plot is defined by the new house and the extension, composed of minimal and abstract volumes, which are separated according to privacy needs. In the main building are the social areas and along the perimeter of the enclosure, the private and technical ones. Typical Mediterranean elements like the well and the shading reeds, gain prominence within the patio, which is oriented towards the south. The interior is minimalist, but in shades of natural elements, creating an overall soothing and relaxing space.

The urban morphology is respected while the new constructions are located where old ones were, anchoring the site to the surroundings in a unique line, open only towards the north onto the main street. The architect explained: “My Grandparents lived here in Meco village, so part of my childhood was spent here. The guesthouse is becoming an asset to the local economy, namely because of its unique characteristics.”
According to Fábio Ferreira Neves, “the memory of everything this courtyard represented laid the foundations of the project.”

Pátio do Meco was one of four Portuguese projects distinguished by public vote in the Architizer + awards: Deloitte’s offices in Lisbon, Casa 3000 and Lisbon Wood. The awards were done on the international online platform, Architizer A + and took place in the Residential Private House Category.

To find out more, visit: http://www.patiodomeco.pt/