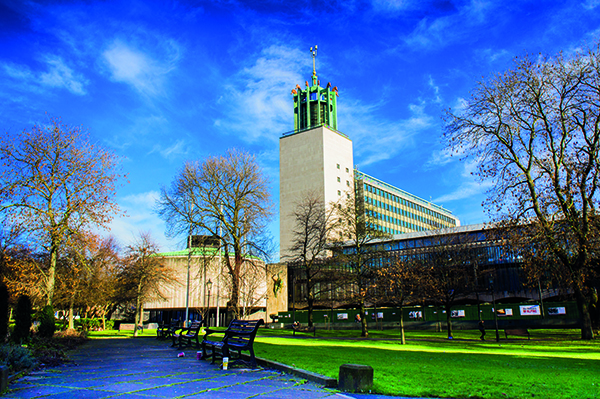 Newcastle Civic Centre is a Grade II* Listed building and operates as the main administrative and ceremonial centre for Newcastle City Council.

Designed by architect George Kenyon, the building was constructed in 1967 and was formally opened the following year by HM King Olav V of Norway. Proposals for a multi-million pound refurbishment of the building submitted by FaulknerBrowns Architects were accepted by Newcastle City Council in 2017.

The proposals included plans for council services to be redistributed to promote greater operational efficiency and consolidation. This redistribution means that space has opened up for HM Courts and Tribunal Service to occupy areas of the Civic Centre, thereby optimising building use and generating commercial income for Newcastle City Council. Within the plans a new identifiable entrance to the Civic Centre has been created to resolve existing circulation and security issues, and to positively promote the council to the city.

Speaking when the proposals were accepted, Nick Heyward, Project Director at FaulknerBrowns, said:
“Our proposals for Newcastle Civic Centre were developed in response to the council’s aspiration to protect, preserve and enhance their unique heritage asset, extending its use as a civic facility and improving its environmental performance. Having received planning permission, we now look forward to ensuring the Civic Centre’s intended use is retained and that the significant listed features that make the building an icon of public services within the city, are preserved.”

FaulknerBrowns is no stranger to the city having been established there for over 50 years. Sir Robert McAlpine is the project’s main contractor.

Due to the historic nature of the building, part of the plan was to transform several floors of the building into modern work spaces and to upgrade the heating and cooling system to incorporate modern energy efficient standards and products. Furthermore, imaginative and intelligent lighting schemes have also been designed with environmental awareness, whilst considering the well-being and sensory perceptions essential to working surroundings.

The Civic Centre is a central landmark in the city and enjoys excellent transport accessibility by both road and rail.

The Civic Centre refurbishment programme which has a target of £32m income over the next 25 years, is transforming the Civic Centre into an efficient and modern working environment, preserving this important building whilst also creating attractive space to generate income.