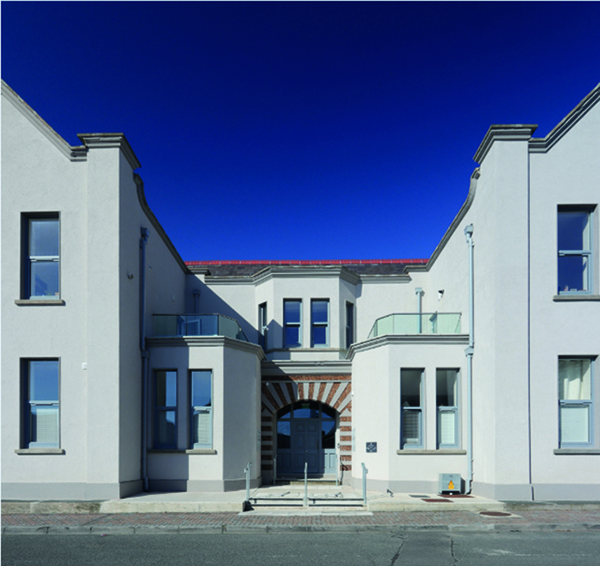 Recognised in the Irish Building & Design Awards, O’Connell Mahon Architects brought Old School House Apartments to life. Their brief was to deliver five one bed apartments and two two bed apartments within the footprint of the existing building following its renovation.

The Old School House Apartments in Arklow town, Ireland, is an exemplary instance of state funded urban and community regeneration. The two year project involved the renovation and re-purposing of the former library and technical school on St. Mary’s Road, located to the south east of the Avoca River. When first built in 1915, the original building was considered the most modern of its day, incorporating Art Nouveau features in its exterior décor, and was opened by Lady Carysfort.

Following relocation of the library, Wicklow County Council identified the building as an excellent opportunity to conserve the historic structure by redeveloping it as badly needed social housing apartments for the town. With its old character and contemporary finish, the restored Old School Apartments building reinvigorates the street on which it sits and serves to preserve the historic and cultural heritage of the town of Arklow.

OCMA (O’Connell Mahon Architects) said: “The main challenge on this project was to retain the character of the original building both inside and out, while at the same time delivering bright, energy efficient accommodation that meets all current spatial and environmental standards and needs, as well as construction regulations.”

In light of this challenge, the layout and arrangement of the apartments were carefully considered to retain as many design features of the existing building as possible. The existing central staircase, which affords access to the upper floor apartments, its fluted timber handrail, decorative balustrading and terrazzo flooring were retained and renovated. Window placements along the façades were retained for the most part to keep the character of the building as it presents to the town.

The existing slate roof and decorative clay ridge tiles were reused, together with new replacement slates where necessary. Cast aluminium rainwater hoppers and downpipes replaced existing pipework, which were profiled to match the originals, and coloured to match the new high performance energy rated aluminium windows and doors. Additionally, the entire building was re-rendered with a high performance acrylic render system.

The ground floor apartments were specifically designed to cater for tenants with particular accessibility needs and to that end were fitted with level access showers. These apartments were also afforded own door access through the provision of new ramped and stepped routes around the perimeter of the elevated building.

OCMA commented: “This was the first social housing project designed and delivered by OCMA. We were delighted to have the opportunity to break away from our more typical design practice and to demonstrate our skills as architects for such a unique and rewarding project, at time of critical need nationally for social housing which was achieved through reusing an existing state owned surplus building stock.  Being recognised for the Irish Building & Design Awards was very satisfying for the office. The nomination brings a welcome morale boost not just for the team, but the office as a whole as it validates our goals to achieve a high level of architectural design quality in all of our projects.” 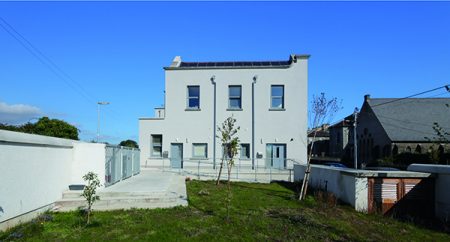