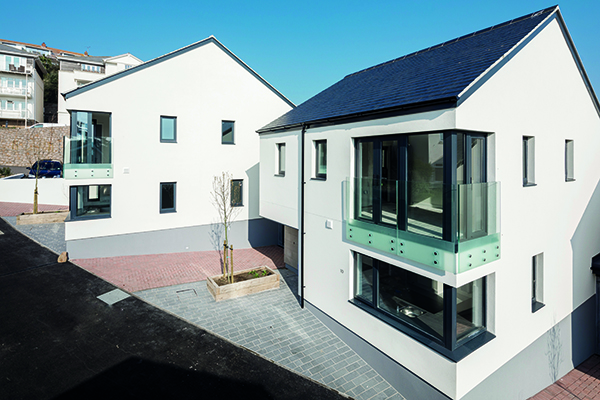 Parkinson Drive includes three new houses. It is in the designated Built-up Area of the Island Plan that extends west, beyond the edge of the town of St Helier, along the south coast.

The opportunity to build here made efficient use of the land to secure further rental accommodation on an established site. The Client is The Jersey Homes Trust, a recognised social housing provider for a large number of tenants in the Island.  The Trust wanted to realise the potential of this land-locked site where architecture Barnes Collie Fischer considered that they could dovetail three new houses into the existing estate of houses and flats.

The site of Parkinson Drive is a steep slope falling from a high point in the north to a low point in the southern-most part and basks in sunlight with very little overshadowing from nearby properties. Given the slope of the site the houses are stepped up the incline, embedded into the contours. Each takes advantage of the level differences to achieve views and solar orientation, whilst maintaining privacy for back gardens and preventing overlooking of neighbouring properties or between houses.  The south facing gables give an impression of the houses marching up the hillside.

Light was very well considered when it came to the scheme; the houses are designed to welcome morning and afternoon sun into principal rooms, without inviting traffic noise or pollution. South facing windows, which could admit excessive solar gain in summer and cause overheating, are generally shielded by adjoining houses or, in the case of the southern-most house, by a screen of established trees.

The new houses are of a form with minimum external envelope, well insulated and thus requiring minimum energy for heating. Windows are draught-sealed and double-glazed, openable for ventilation and cleaning.  Materials were selected for robustness, longevity and low embodied energy.  These factors are designed to limit carbon emissions and make the houses more manageable for the tenants and the housing provider.

Given the predominance of white or light-coloured render and slate roofs in the locality, and in the Island as a whole, the design brief was to create a clean, crisp white render group of houses with natural slate roofs. The design is a modern re-interpretation of typical, modest, simple, and plain rendered and painted, two storey houses found in the neighbourhood. Fenestration represents a balance between solid and void consistent with proportions of traditional houses, whilst reflecting modern preoccupations with inside-outside patterns of living.  A deep recess is created at the entrance to give shelter at the front door.

Finally, there are subtle shifts of each building’s location and height in relation to one another and the site offered possibilities to improve internal conditions and to introduce an architectural conversation and rapport with the existing buildings on site – in particular, the terraced houses opposite. The former “estate road” becomes a “place” in its own right and, once the new houses form a sense of enclosure, it takes on the status of “street”, with a pedestrian route to nearby facilities and bus stops and an approach to the front doors of all the houses, overlooked by kitchen windows of the three new houses.

Parkinson Drive was highly commended at the 2019 Jersey Design Awards in the ‘Best Large-Scale Development’ category.