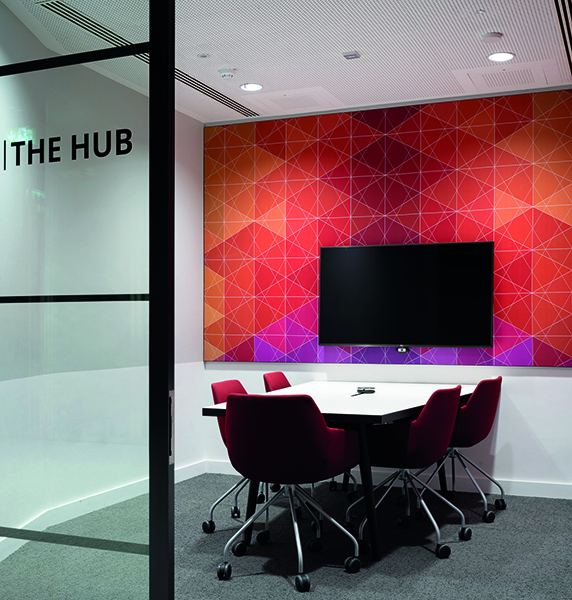 Banking & Payments Federation Ireland (BPFI) represents the banking, payments and fintech sector in Ireland.  Together with its affiliates, the Federation of International Banks in Ireland and the Fintech & Payments Association of Ireland, BPFI has some 100 member institutions and associates, including licensed domestic and foreign banks and institutions operating in the financial marketplace here. BFPI has recently relocated to new offices at Floor 3, One Molesworth Street, Dublin 2 and their new office fit out saw them receive a 2019 Fit Out award for ‘Fit Out Project of the Year – Small Office over €500k.’
PREMIER CONSTRUCTION MAGAZINE spoke to Ann Smith, Director Corporate Services at BPFI about the project and award win in a bit more detail.

How did this project come about?
“This was a brand new building of which we took half a floor. We only got notice that we had secured the lease in June 2018 and we needed to be out of our building by the end of that year so we had a really short time period to do what we needed to do. We were starting from scratch and moving from a 50 year old building. We knew we had this blank canvas space so we were able to do whatever we wanted to do.”

How did you transform the space into what you wanted?
“The first thing we really wanted to do was have a multi-functional conferencing space. Because we are a membership organisation we have a lot of meetings with members and we wanted to be able to bring some of our events into the space so we designed the conference centre with total flexibility in mind. We ended up with four big meeting rooms that hold between 16 and 20 people but then all of the walls are foldable so they can be opened up to create bigger spaces.”

How important was the flexibility aspect to you when designing the space?
“It was absolutely vital because in our previous office there was only one option where you could open a door into another room but the furniture was pretty much fixed to the floor so you had to get people in and out to move things. Here the team are able to move the wooden and glass partitions easily to create the bigger, open spaces we need.”

What are some of the other features of the office?
“The most important thing was to create a space for our members and then it was about our staff so we created a dedicated staff area. We have moved into an open plan environment where we have much more collaboration opportunities. We have been in this building for a year and it has totally transformed the way we work together. We have a beautiful kitchen area that we call the ‘Meet & Eat’. People go in there to make coffee and get talking to people they wouldn’t usually talk to. We ended up having to get an extra table because more and more people were using the space for lunch on a regular basis.
“The other thing that we really wanted were phone booths for privacy so we have sound proofed booths where people can have private conversations without disturbing anyone else.
“We also have a dedicated quiet room so if anyone is feeling a bit stressed or just needs a bit of time away we have a small room with a chair and footstool. It is a really calming space for people who need it.”

What has the reaction been like from those using the office?
“The feedback has been really positive. People really love it. It is a great place to work and it is a beautiful space. The reaction from people who come into the space and look around is also amazing.”

What was it like to win the Fit Out Award for Project of the Year – Small Office?
“It was the icing on the cake! It was brilliant to win the award. We are all so proud of the space.”

How important has the project been for you to be involved with?
“I worked on the project with one of my colleagues and we knew what we wanted. The architects and project managers were great to work with. When I worked on the project it was the most fun I have ever had at work and I say that to anyone who asks because it really was. It was such a pleasure to work on this project and it was something totally different to what I usually do; I got such a kick out of it!”