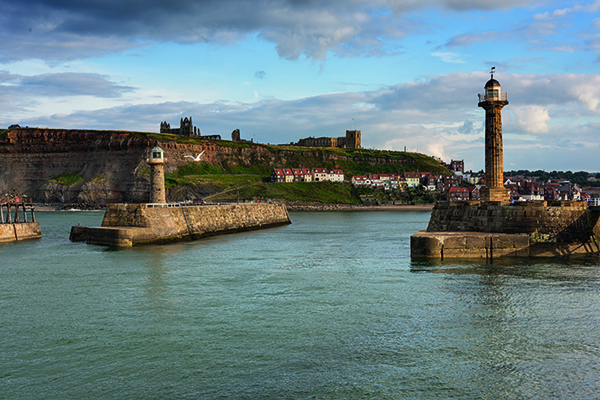 A £9 million coastal protection scheme of refurbishment works to the historic stone built East and West Piers in the Yorkshire coast town of Whitby has been successfully completed, on time and within budget.

The scheme to upgrade the aged structures involved stabilising the external sandstone facing blocks of the piers, filling in any voids using concrete and also repairs to the top surface of the piers to prevent damage from water ingress during wave overtopping.

The scheme was carried out for Scarborough Borough Council by Balfour Beatty.

Although the piers were still quite stable, it was decided that major refurbishment was needed. It was originally thought that the piers were each constructed of two stone block walls with infill between, and that the sea had penetrated between the joints of the blocks and washed out some of the finer infill, causing the infill above to drop down, thus creating voids.

However detailed investigations revealed that each pier is constructed of several stone walls with infill between, and divers also discovered scouring of the piers on the sea bed.

Cllr. Mike Cockerill, former Portfolio Holder for Major Projects at Scarborough Borough Council said: “The piers are old and over the years have withstood weathering from rain and rough seas which caused them to deteriorate. Investigations revealed that some of the blocks at the base of the piers were laid on wooden planks positioned on the seabed – and in some cases these had sunk, resulting in the lower stone blocks dropping and a loss of support for the blocks above.”

The main scope of the project comprised repairs to the masonry walls using a combination of concrete, structural grouts and mortars, and replacement stone blocks from a local quarry (Aislaby – the original source for much of the stone used in the piers’ construction and historic improvements).

Cllr. Mike Cockerill said: “Trenches were excavated in approximately 3m sections along the base of each pier and filled with concrete in between the sea bed and the base of the bottom structural blocks to add stability and support to the walls. Gaps discovered between the blocks were also infilled with mortar.”

Another problem addressed by the project was seawater ingress originating from a slipway down the side of the West Pier. The seawater then ran along Pier Road and downhill, flooding properties in the town.

Cllr Mike Cockerill said: “This was resolved by a solution put forward by the Harbourmaster and an engineer, which I strongly supported and involved the construction of an arc shaped blockwork flood wall at Battery Parade to divert the water back into the harbour, lessening the impact of waves that batter the slipway during high tides and in stormy sea conditions.”

This solution has proved to be extremely effective.

“The overall project has just been completed and Balfour Beatty did a good job on time and within budget. I am very pleased with the scheme.”

The council worked closely with Balfour Beatty to ensure regular communication and engagement with the local community throughout the project.