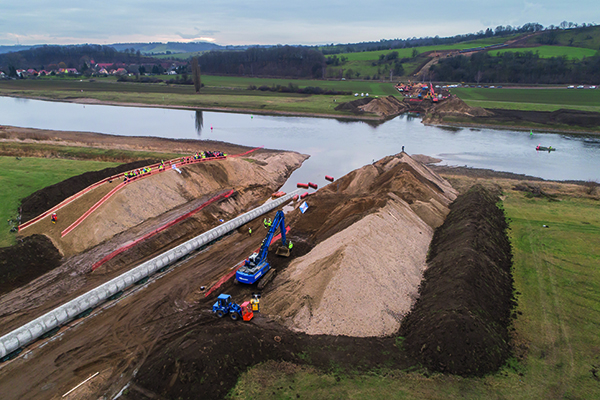 After almost a year and a half of construction, the first line of the European gas connection line to EUGAL is ready. It was ready for transport from 1st January 2020. The EUGAL line runs for around 480 kilometres from Lubmin on to the Baltic Sea to Deutschneudorf on the German-Czech border. “The completion of the first strand is a great milestone for our project. More than 2,500 people worked on the route at peak times to make this possible,” explained Christoph von dem Bussche, Managing Director of GASCADE.

Around 27,000 pipes were installed for the first strand – each of the pipes is around 18 metres long and weighs 15 tons. The diameter of the line is 1.40 meters. The full regulated EUGAL pipeline is embedded in the German and European natural gas network by connecting to the existing long-distance gas pipelines NEL, FGL306 and JAGAL and EUGAL enables flexible gas transport in all directions.

Plans for the project started back in 2016 when the demand for flexible transport capacities for natural gas was starting to grow. The Kassel-based company GASCADE reacted to this demand with plans to extend its 2,400 kilometre natural gas pipeline network. In order to cope with future requirements, plans included the build of the European Gas Connecting Pipeline (EUGAL), a 480 kilometre pipeline which will run from the Baltic Sea to the German-Czech border.

At the time of announcing the plans, Ludger Hümbs, the EUGAL Chief Project Manager said: “We need to ensure today that the network meets the needs for tomorrow. We know that transport routes need to be more flexible. For example, we need capacities in the west-east direction in order to supply the gas ordered by Poland and the Czech Republic. Expanding the network is the only way to cope with the major changes in the European gas market in the future.”

The section through Saxony will run from Großenhain in a southerly direction as far as the German-Czech border near Deutschneudorf. In order to minimise the space required for the section around 110 kilometres in length, the pipeline will be laid as close as possible to the OPAL natural gas pipeline which went into operation in 2011.

After the successful completion of all planning approval procedures in the third quarter of 2018, the construction of EUGAL began. The first line was installed at the end of 2019 and was operational at the start of 2020. The construction of the second wiring harness takes places in parallel in some areas. However, the second line will not be fully completed until about a year later and will then be operational.