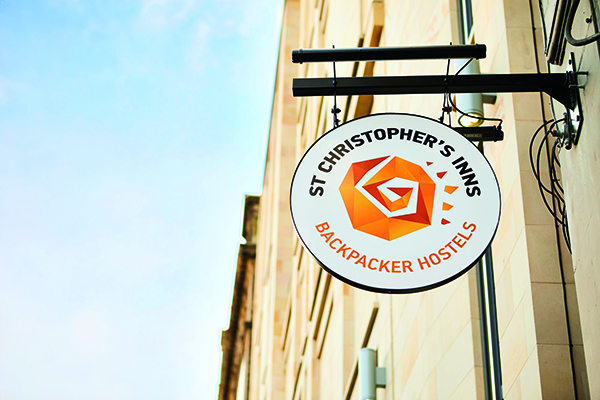 Belushi’s, one of Edinburgh’s most popular sports bars, has been given a major makeover, which has also seen it move to a neighbouring building across the road.

The move has been made possible thanks to a £2.3m investment by parent company Beds and Bars, which operates both Belushi’s and the neighbouring St Christopher’s Inns, a 180-bed hostel for young backpackers.

The company, which operates backpacker’s bars and hostels in nine cities across seven European countries, is making a major investment in the Scottish capital, having operated in the city since 2001.

As part of an ambitious expansion, it has secured a former fruit marker building on the opposite side of Market Street and has transformed it into 139 hostels beds, spread across 18 different rooms.

Michael Kelman from Leask Architects, the architects behind the transformation, told PREMIER HOSPITALITY MAGAZINE:  “They had a fairly clear idea of what they were looking for. They wanted a 200 person bar with the hostel beds split across a number of dormitories.”

As part of the sensitive refurbishment of the building, 10 historic “phoenix columns” have been incorporated into the design of the two storey structure. The unusual iron, hexagonal columns were patented by Samuel Reeves of the Phoenix Iron Company in Pennsylvania in 1862 and are renowned for their immense load bearing weight – hinting that the building was designed for heavy industry related to the neighbouring train station.

The historic stone and steelwork has also been restored and has been left exposed. The external façade has seen the original doors and windows restored, while ironmongery has been sourced to carefully match what would have been there originally.

Michael added: “There is a really good fusion of the industrial funky design that has been brought in mixed with the traditional industrial features of the building making it quite edgy overall.”

Within the hostel, the 18 rooms have been given Edinburgh localised room names.

Michael said: “Edinburgh has a wide diversity of areas and each area has its own unique identity so we looked at central and outer central line areas, as well as the old town and new town and some landmarks that people may or may not be familiar with. Once we came up with these areas, we gave names to the individual rooms and worked with the clients branding to create signage and wallpaper design. The rooms are essentially themed on each area of Edinburgh so when you go in there is a feature wall depicting the specific area of Edinburgh that the room name is based on.”

With the bulk of the Edinburgh investment in the new venue, the original hostel has also benefitted from a series of improvements and upgrades – including a revamped reception, chill out and breakfasting area in the narrow strip of the building occupied by the old Belushi’s.

Belushi’s on Market Street has become known as one of the top spots in the city for young sports fans to watch the biggest football and rugby matches, as well as more niche sports such as NFL and AFL, offering multiple screens and impressive food and drink deals combined with a party atmosphere and state-of-the-art audio visual.

Now the renowned city centre venue has been transplanted into a bigger and smarter new home to enable a more cutting-edge sports viewing experience.

Bar Manager Olivia Callaghan said: “As an international sports bar, this is a dream move for us. It’s a transfer that takes us into a different league. We have more space, more screens and more choice both at the bar and on our food menu – and we are able to offer live music and become even more of a party venue.

“It’s an incredibly exciting move for us and we’re really looking forward to welcoming many new customers.”

While the bar Belushi’s is a standalone brand, it is usually found below Beds and Bars backpacker hostels across Europe, giving guests a fun space to socialise, relax and meet real locals during their travels.  However, the popular bars have also found a loyal audience among city locals, thanks to its relaxed vibe, affordable prices and the wide choice of major sporting events shown there. 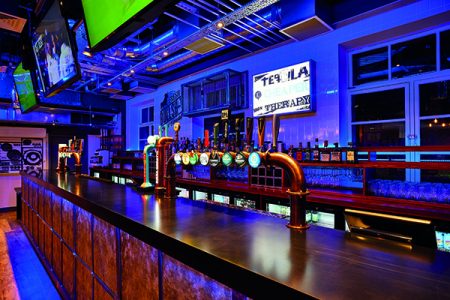 As a leading design house specialising in the consultation, design, production and installation of commercial bars and kitchens, Grey Simmonds Food Service Equipment have worked with a wide range of clients from small café’s, restaurants, hotels, leisure clubs and care homes to large pub groups such as Fuller Smith and Turner and the Stonegate Pub Group.

Grey Simmonds’ involvement in the St Christopher’s Inn refurbishment was based around the kitchen area; designing and producing a fully operational kitchen. This included a dish-wash area, bespoke stainless steel and a range of cooking equipment.

Whilst Grey Simmonds Food Service Equipment are experts at commercial warewashing solutions, they also supply the leading brands of commercial catering equipment, from cookers to refrigeration and everything in between at a competitive price. They can source bespoke and specialist equipment to ensure you find the perfect product for your kitchen or bar.

CAD manager Oliver Hardwicke says, “Our company credo is ‘Consult, Design, Install’. We see each project through from start to finish including site survey, preliminary sketches, CAD drawings, Design and budget approval, equipment sourcing and final installation. This means our clients have one point of contact for the entirety of the job making each stage as seamless as possible.”

For over 40 years, Taplanes has created custom-made, modular bathroom solutions which make the most of available, often challenging or difficult to access, spaces.

Our tailored and bespoke shower & bathroom pods are suitable for all kinds of structures – traditional build, modular constructions, listed buildings, and quirky spaces; allowing clients to enjoy the benefits of modular pods combined with the construction flexibility of traditional build. Our products can be found in hotels, hostels, universities, healthcare, oil rigs, prisons, glamping pods, even in Antarctica’s Halley VI Research Station.

After partnering with St Christopher’s Inns on several projects throughout Europe and the UK, Taplanes was asked to create innovative bathroom solutions sympathetic to Market Street hostel’s existing built environment. Our flexible designs combined style and functionality with the benefits of a completely watertight modular product, making the most effective use of space and minimising ongoing maintenance – this wouldn’t be possible with ‘off the shelf’ products or traditional ‘tile and grout’ alternatives.

Taplanes has supplied sustainable solutions to thousands of organisations in the UK and Europe; including Hostelling Scotland, University of St Andrews, YHA England & Wales, the Universities of Cambridge and Oxford, The University of Edinburgh, Balmers Hostels in Europe and Texo Accommodation offshore projects, to name a few. Being durable and reliable without compromising on aesthetics, they are a cost-effective, easy-clean solution requiring minimal maintenance.