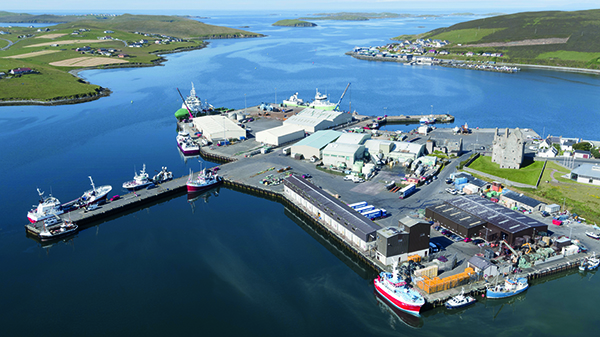 The construction of a brand new state-of-the-art fish market building, the installation of replacement ferry linkspans and a pier redevelopment are three key projects being carried out for Shetland Islands Council.

The new Scalloway fish market building at Blacksness Pier replaces the original, which was built in the 1970s and refurbished and extended in the 1990s, before being demolished.

CHAP Group are main contractors for the £5.6 million project to provide the new facility, which was desperately needed as the volume of fish being landed rose by 600% between 2004 and 2015. Vessels were often turned away and were unable to land their catch due to lack of capacity.

The market replaces a temporary chilled facility which has been in use since the demolition of the previous fish market. While the temporary landing facilities have been praised by local fishermen, it will be an added boost to the islands to have their new facility ahead of programme.

Chairwoman of the council’s harbour board Andrea Manson said: “The upgrade of Scalloway fish market means we will be able to offer greatly-improved facilities to arguably the isles’ most significant industry.”

Earlier this year CHAP completed the construction of the new fish market in Peterhead, part of a £51 million redevelopment of the town’s harbour.

This major project to replace or renovate all of Shetland’s ferry linkspans is the first such work to be undertaken for around 20 years.

Running from around May 2019 to September 2021, the scheme includes the renovation of the Ferry Service’s spare linkspan unit and its removal to Vidlin – the first site to be worked on – where it replaces the existing equipment there.

Another element of the scheme comprises the replacement of an existing control hut with a new pre-fabricated version, which will contain, as well as hydraulic and control equipment, a standby generator to run security and ICT equipment, navigation and LED street lighting.

The new control huts are being designed and constructed by JHUK Ltd (John Henderson UK Ltd.), who also designed the existing hydraulic and control systems at Toft, Ulsta and Hamar’s Ness.

Councillor Ryan Thomson chair of the Council’s Environment and Transport Committee said: “Our linkspans are critical to our fleet operation and any fault has a significant effect on the ability of an island community to function effectively.”

TMS (Teignmouth Maritime Services Ltd) is hard at work on the contract for the Toft Pier redevelopment. The contract comprises the replacement of the pier located within the Sullom Voe Harbour Area.

Built in the 1950s for the Yell ferry service, the pier was rebuilt in the ’70s but became redundant after a new ferry terminal was built in 2000. Usage of the pier by certain sectors, such as salmon and mussel farming, largely stopped after it was closed off to vehicles in 2014, having been deemed unsafe.

Drilling operations prior to pile installation were undertaken with the TMS road transportable modular pontoon ‘Sinbad’. Complete with 12m legs and hydraulic spud leg lifters, ‘Sinbad’ can comprise up to 5 x 12mx13m pontoons.

The works included the use of a long reach excavator operating from ‘Sinbad’, placing fill on the seabed after excavating to remove an obstruction to new piles. All of the stone used in the project has been locally sourced from EMN Quarry.

The scheme is going well despite challenging weather, and is due for completion in late 2020. Redevelopment costs of nearly £3m are being funded by Shetland Islands Council, with £1m of that covered by a grant from the European Maritime and Fisheries Fund.

TMS has over 27 years’ experience as a marine contractor within civil engineering, with work undertaken across the UK and Europe.