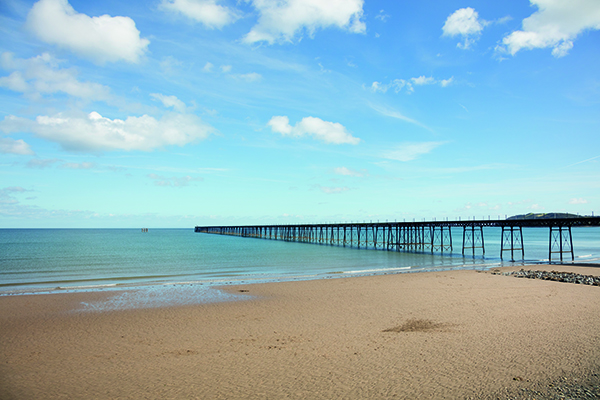 The restoration of key elements of a historic island landmark is underway in a project to refurbish three bays of the Queens Pier in Ramsey, Isle of Man.

The project is being carried out by the Queen’s Pier Restoration Trust, who signed a five-year lease with the government in July 2017 to refurbish bays 1 – 3 of the Victorian landmark.

Measuring 2,160ft long, the pier was built for the Isle of Man Harbour Board as a low water landing stage. Construction began in 1882 and the pier was officially opened on 22nd July 1886.

The pier was finally closed in June 1990 after a massive fall in numbers of people using it and increasing maintenance costs. Some of the main timbers and under-deck girders were badly rotted, and a complete overhaul was necessary. The Isle Of Man government deliberated on repair options and costs, but nothing was done for 25 years – until the Queen’s Pier Restoration Trust was set up.

The refurbishment is being led by project manager Captain Stuart McKenzie who said: “I have a background as a master mariner and offered my assistance to the trust after I noticed that they did not have anyone on their initial steering committee who had a marine background. The trust was later formed into a charity and a company in order to carry out the project, with much of the work being undertaken by volunteers.

“The first thing we did was to spend an entire year surveying the pier so that we could submit the results to the government in order to obtain permission to start the works. We then commissioned BB Consulting, structural engineers of Douglas, to utilise the original John Coode designs and prepare a modern equivalent.”

After six months of negotiation, the team were given permission to restore the first three bays at the land end of the pier as a pilot project. There are 60 bays in total and eventually all the ironwork along the length of the pier will have to be replaced.

Captain McKenzie added that the first bay measuring 40160ft is by far the most difficult to restore, because it is larger than the other bays as it is attached to the promenade. A further complication is that the pier abuts the promenade at an approximately 20 degree angle rather than at 90 degrees, so all the girders and wooden beams which need to be refurbished at the promenade end have to be shaped to accommodate this.

Works to bay 1 involved replacing all of the cast iron girders with mild steel, fabricated at Gallas foundry in Douglas. This was then galvanised on Merseyside and painted with five coats of marine epoxy by the volunteers, on its return to the island.

New cross larch timber beams and longitudinal stringers laid on top of the girders were sourced from the Isle of Man with the assistance of the island’s Forestry Department.

The decking surface of the pier, made of Ekki timber sourced from West Africa, is then laid on top of the longitudinal stringers. Captain McKenzie commented: “Ekki is a very hard wood and has also been used in the renovation of Hastings pier. In this project the cost of the Ekki planks has been been funded by the public and every plank will have a plaque bearing the name or message from the donor.”

Similar works are being carried out to bays 2 and 3, each of which measures 40ft, with the new mild steel elements being fabricated by Phoenix 4 Fabrications of Glasgow, who will supply the steel both galvanised and painted.

The completed works will then be signed off by structural engineers in order for the Isle of Man Government to allow works to proceed further down the pier.

The first bay is expected to be completed next March, with completion of the remaining two bays anticipated by the end of next year.