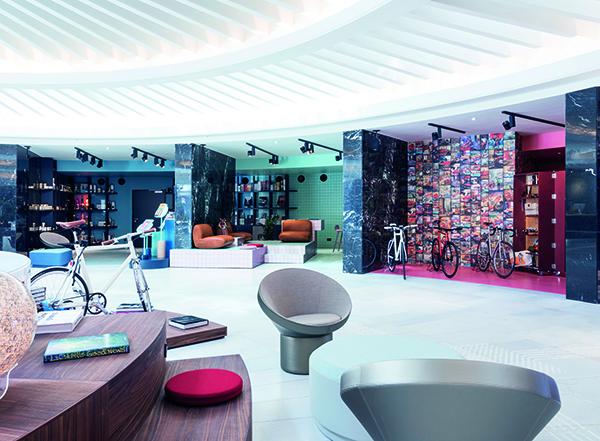 25hours Hotel The Circle is situated just a few minutes’ walk from the city in a spectacular rotunda in the heart of Cologne. In collaboration with hotel brand 25hours, the Berlin creative team from Studio Aisslinger – headed by interior designer Werner Aisslinge – developed a design concept on the subject of retro-futurism for the listed building in the middle of the Friesenviertel district.

The story Studio Aisslinger sets out for the hotel takes the architecture and the time in which this spectacular rotunda building was built. The studio’s storytelling team let itself be fascinated by faith into the future so characteristic for the West German society during the first decades of the Bonn Republic. Ideas, materials, and colours from this period, in which everything seemed to be possible, developed into the theme of ‘retro-futurism’, guiding conceptually the design of The Circle in Cologne. The name thereby refers not only to the building’s circular floor plan, but alludes also to Dave Eggers novel ‘The Circle’, an imagination of the future, in which the liberating possibilities of social media revert to total surveillance and control.

The spacious main hall of the hotel, which, once upon a time, policy holders of the Gerling Group paid their insurance contributions, now has a welcoming café and co-working spaces for stress-free working and relaxing. The 207 rooms are urban retreats with contrasting themes: playful retro style meets imaginative future utopias.

There are five types of room at The Circle:

At the heart of the 25hours Hotel The Circle is Restaurant NENI and the Monkey Bar on the 8th floor; giving a unique view of Cologne Cathedral. On the 7th floor, guests can switch off with a view of the city in the spa area of the hotel. It is inspired by futuristic countryside utopias, and is equipped with a sauna and separate relaxation area. The outside terrace is a place to cool down in winter and somewhere to relax on loungers or swings in the warmer months.

With its unique symbiosis of storytelling, narrative architecture and collage principles Studio Aisslinger counts among the trend-setters in ‘spatial design’. Additionally, they are also pursuing new paradigms to guide their design practice; experience architecture and Instagram worthy spaces have become conceptual centre pieces to their design projects.

25hours Hotel has never lost its passion and optimism when it comes to the ups and does of developing and running hotels. They believe their curiosity, courage and standing up for what they believe in has gotten them where they are today; and their mission is to create soulful spaces & memories. 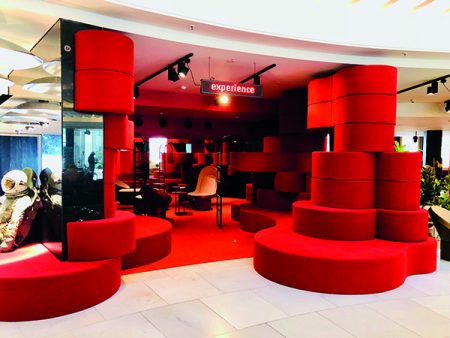 The company was recently responsible for repurposing the former HQ of the Gerling Insurance Group in Cologne into lively hotel The Circle. In 2015, Immofinanz Deutschland GmbH entrusted the O&O Baukunst agency with planning and implementing conversion measures for the listed building.
Identifying a building’s inherent qualities and transposing these into new and lasting creations is one of the agency’s most important tasks, because dealing responsibly with existing structures is also essential in light of the current focus on sustainability.

Renewing and building within the existing atmosphere, work began by restoring the historical stone façade and its striking relief in a manner suitable to the building’s listed status, and by reactivating the existing pools and fountains.

Furthermore, finding an approach that is in tune with the local setting has always been important to O&O Baukunst, be it referencing the architectural context or the scenery of the surrounding city. This can be found in an incomparable view over the rooftops of the city to Cologne Cathedral in the freely accessible restaurant with bar and terrace.