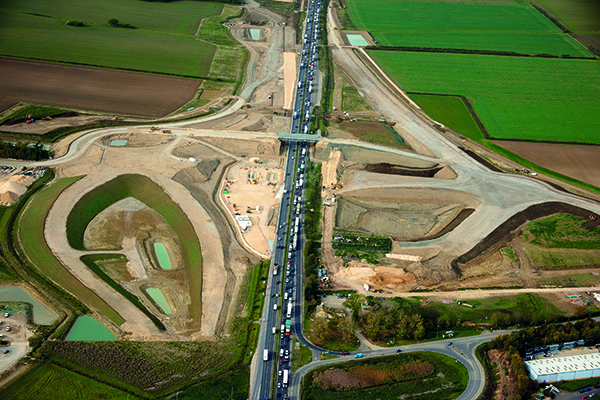 A new 12-mile bypass to the south of Huntingdon in Cambridgeshire has opened to traffic. The new bypass runs between Ellington and Swavesey and is part of UK’s biggest road upgrade – a project to upgrade 21 miles of the A14 between Cambridge and Huntingdon.

The bypass has been opened a full year ahead of schedule. Highways England project director David Bray said:

“Opening the Huntingdon Southern Bypass is a huge achievement in the delivery of this major road upgrade and I’d like to thank road users, residents and stakeholders for their patience and support during construction.

“Opening the new bypass will start to unlock many of the project’s benefits and, together with the upgraded section of the A1 between Alconbury and Buckden which opened earlier this year, means that the western section of the transformed A14 is essentially complete.

“Like any new road, it will take some time for drivers to get used to driving on it, especially when the junctions have a new layout, and some have been renumbered. Please drive safely and enjoy the new road.”

Slow moving vehicles are prohibited from the new bypass and will be directed to use alternative local access roads.

The completion of the bypass is the latest milestone for the £1.5 billion A14 Cambridge to Huntingdon upgrade. The £1.5 billion scheme will transform journeys on one of the East of England’s most vital roads, speeding up journeys by up to 20 minutes, adding capacity and boosting the local and national economy. It is due to be fully complete by December 2020. It is being delivered as part of the Government’s £15 billion Road Investment Strategy, the biggest programme or road improvements since the 1970s.

The project includes widening a total of seven miles of the A14 in each direction (across two sections), a major new bypass south of Huntingdon and widening a three-mile section of the A1. A total of 34 main bridges and structures are on the project. The River Great Ouse Viaduct is one of the 34 and was one of the project’s first milestones when it was completed in 2018.

It is by far the biggest bridge on the 21-mile stretch, taking the A14 over the river and the East Coast Mainline Railway. The viaduct took 18 months to build and includes some 64 pillars, each around two metres wide and embedded up to 30 metres in the ground. The pillars support the 17 spans of steel beams and concrete slabs which form the bridge deck.

Across the entire work, the project team has been delivering extensive protection for the environment and has uncovered astonishing archaeological finds, which are shining new light on thousands of years of history.

A team of up to 250 archaeologists led by experts from MOLA Headland Infrastructure has been investigating 33 sites across 360 hectares. Finds so far on the A14 have included three Anglo Saxon villages, an abandoned medieval village, 100,000-year old woolly mammoth tusks and a woolly rhino skull, a Roman supply depot and rare Roman coins from the third century.

Experts on the scheme also uncovered what is believed to be evidence of the first beer brewed in the UK, dating back as far back as 400 BC. The improvement of the A14 between Cambridge and Huntingdon was honoured with “Rescue Project of the Year” accolade in the 2019 Current Archaeology Awards.