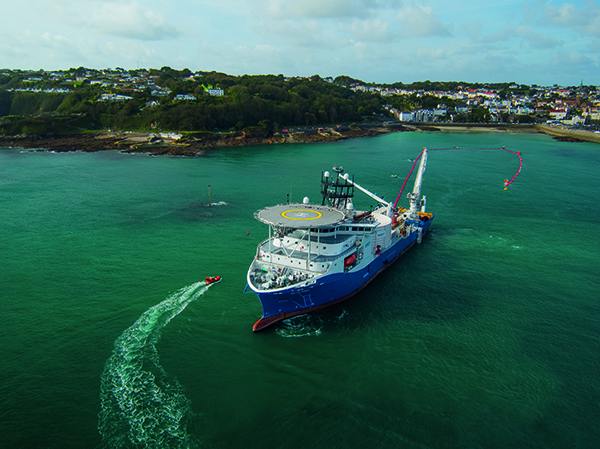 Today we all expect to have a secure and stable supply of electricity that is both renewable and low carbon. The sub-sea electricity cable that connects Guernsey to France via Jersey provides our islanders with exactly that.

Every unit of electricity we import this way replaces a unit that would otherwise be generated from fossil fuels on island.

Unfortunately, in late 2018 the cable between Guernsey and Jersey, known as GJ1, failed. It had proved to be less than reliable in recent years and had already been repaired multiple times.

How did the replacement come about?

“Following a failure in October 2018, Guernsey lost access to the French electricity grid and with it, its supply of low carbon energy.  The Guernsey Electricity team responded at an incredible pace with a tactical temporary solution that enabled the cable to operate at reduced capacity and a strategic plan to replace the cable before the end of 2019.

“Without the cable being able to operate above 25% of its capacity, the remainder of our electricity demand was generated by our on island power station. This resulted in us emitting an additional 216,000 tonnes of carbon dioxide at an additional cost of more than £11million for the year. We believe that this was a totally unacceptable environmental and financial position and fully supports our decision to replace the cable.”

With this being a project carried out at sea, how challenging was it?

“The challenges went beyond the shore. There were so many elements to this project that all had to go right, and be completed on time, in order to enable the cable laying to take place on the agreed dates. The manufacture of 37km of cable, transporting it to Guernsey, offshore surveys, selecting and preparing the route and preparing the onshore connections were just a few of these. We did all of this while also generating electricity from the power station in Guernsey.

“Timing was everything- our programme had to be led by a balance of the tides and the weather and our best tidal window was in the autumn, which wasn’t ideal weather wise. It took perfect planning and an incredibly capable team to manage the potential for adverse weather with the need to get a cable laying vessel over 140m in length into a small bay to enable the shore ends of the cable, which weigh 77kg per metre to be floated out. It was like engineering ballet – I’m delighted that it went so well. Our contractors were the best in the industry and delivered the project, on time, on budget and most importantly safely.

“As a team, we are very proud of the successful replacement of GJ1, which was completed as a matter of emergency and in record time. I would like to take this opportunity to thank all teams at Guernsey Electricity and the cable manufacturer, NKT, for their hard work throughout the course of the project. The ongoing support and patience of our stakeholders and the general public in both Guernsey and Jersey has also been greatly appreciated.”

How does this prepare us for the future?

“Our undersea cable allows us to import over 90% of the island’s electricity from renewable and low carbon sources. Resilient connections to the European electricity market are key to securing this, with the power station remaining as our back-up measure.

“Guernsey Electricity’s long-term strategy is to continue to invest and plan for a direct cable link from Guernsey to France, which will further decrease our on-island reliance on fossil fuels and provide electricity supply resilience, even in peak times.

“This direct cable will allow us to manage the gradual transition to more locally sourced energy, as renewable technologies develop and present opportunities for Guernsey to become more self-sufficient. A resilient and secure grid will be the foundation of any future move towards local renewable energy.” 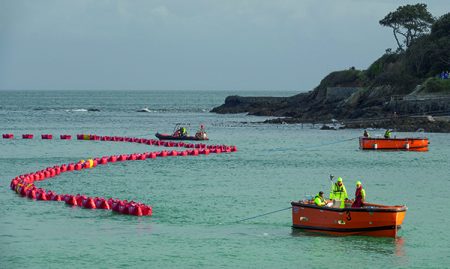