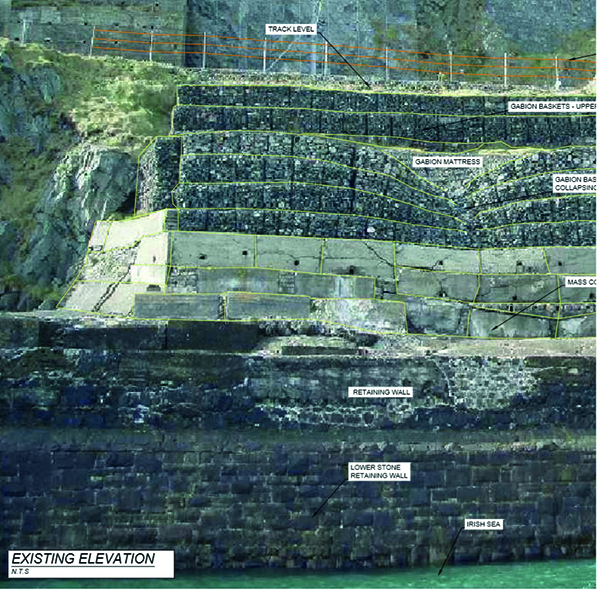 Known locally as Structure C, the costal defence asset CDR074D is situated on Bray Head on the railway line between Bray and Greystones in Co. Wicklow, Dublin within an SAC Area.

Much needed repair works were located on a steep slope in a difficult area that was supported by a gabions structure since 1970. There had been movement noted in the gabions and this resulted in a deformed shape. This was monitored over the years with geotechnical inspection reports compiled in 2016, 2017 and 2018. These determined that the issue was that fines were being washed out by flow through a ravine in the rock face causing excessive settlement or void creation leading to the obvious depression in the gabion baskets.

The scope of works included the following:

The proposal of works was to reinforce the gabion buttress with precast concrete blocks that were anchored with vertical and raker piles. The inclusion of drainage using proprietary Drill Drain® specialist technology was also completed. The blocks used in the installation of the precast concrete wall were of a size suitable for lifting and were interlocked to provide an instant retaining structure. The blocks supplied by Shay Murtagh Precast were coloured and textured to provide a structure that would blend into the environment. They were reinforced with poly fibre so that they were durable and would not deteriorate in the coastal environment. The other areas of deformations were filled with Kowa filter bags and a new gabions basket retaining structure was constructed. There was no demolition or excavation as this would create temporary support issues with the track and would have raised environmental issues.

The works were undertaken in a coastal location which is only accessible via the railway line. They were completed over a period of eight weeks with the majority of the works being completed during two TIII absolute disruptive possessions taking place over two separate weekends, one lasting 75 hours and the other 51 hours. The works to the concrete strip foundation were undertaken during normal working hours under ‘red zone’ protection while the railway line was operational. Plant, equipment and materials were brought to the site during non-disruptive overnight track possessions from 2am to 4:30am Tuesday to Friday when the railway line was not in operation over the course of the construction period.

To carry out the work, TRIUR supplied their own wholly owned extensive specialist plant fleet with larnród Éireann supplying all road/rail plant required to TRIUR for the duration of the works. A big success on the project was the carryout 550no of crane lifts in 66hrs. This meant a lift was carried out every 7.2 mins for 66hrs which included placement adhering to very tight tolerances.

The completed strengthening works to the existing buttress and track support zone has successfully delivered upon an ambitious and extremely clever design solution by Irish Rail. The new facility has delivered a finished product fit for purpose without deviation from the original design. The new facility has provided a more aesthetically pleasing visual aspect to its façade than originally envisaged and this can be seen by the extremely well finished façade of the masonry filled gabion baskets, which in turn compliments the masonry faced pattern of the precast concrete modular blocks.

Planning, programming and team work was the key to success and construction excellence on this project. Regular meetings between TRIUR’s site management team and IE’s site supervisory and design teams created a partnership like approach to the project which ensured that no items or sequencing of works was left to chance. This was monumental in the successful delivery of the project safely, on time and within budget. TRIUR also employed the services of technical experts from the various material suppliers to ensure that a full understanding of the potential of each product was appreciated, thus allowing innovative construction techniques to be adopted and implemented by TRIUR in the logistical programming and completion of the works.

With regards to the works itself both TRIUR Construction’s vastly experienced site management team and directly employed highly skilled and experienced site operative team were a distinguishing factor in the delivery of the project as they combined leadership, workmanship and resolve in an extremely challenging environment to achieve the desired end result which exhibits construction excellence.

The Project was completed on time and on target for the budgeted costs.

The project has recently been shortlisted for a 2020 Irish Construction Excellence (ICE) Award in the category on ‘Specialist or Specialist Services Contract.’ Winners of the ICE Awards will be announced on Saturday 28th March 2020. 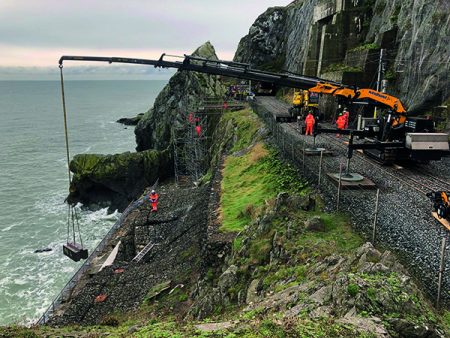