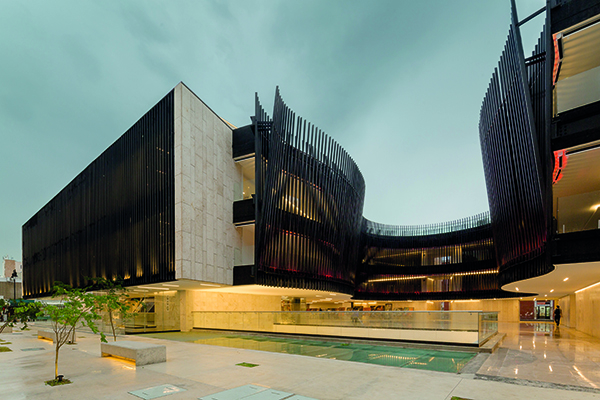 Winning pride of place in the International Property Awards 2019 ‘Best Public Service Architecture Mexico’ category, is the new Palace of Mexican Music – a stunning new building in Merida, Mexico, dedicated to teaching, listening to, and exploring the history of Mexican music.

The building comprises four storeys (one underground and three above).

The underground level houses the interactive Museum of Mexican Music, with 1200 sq m of exhibition space divided into six rooms, each with a particular theme. The museum showcases the development and evolution of Mexican folk music from its origins to the present day, highlighting its main genres. Complementing the museum, this level includes a shop, storage areas and utility rooms.

At street level, the building is mostly open plan, allowing pedestrians to walk through. This level also features the entrance to the museum, a concert hall and an archive for the largest collection of recordings from the National Record and Music Library (Fonoteca Nacional) outside Mexico City.

The library has 650 sq m of space for storage and the archives of original radio and video recordings collected over the years. Aside from the entrance, the street level also features a central courtyard named ‘Patio of Strings’ and intended as a music performance space which is open to the public and the street, and has a capacity of 400 people.

Lastly, the rooftop is designed as a terrace with gardens overlooking the nearby cathedral and Third Order Temple, allowing new views of the heritage sites surrounding the project.

There are also full facilities for people with disabilities, including backstage, and within a professional recording studio.

Beda Guzman of Quesnel Architects said: “The project involved the sensitive insertion of a modern building into a physical context of great historical value. As a public building, the palace represented an opportunity to revitalise and regenerate the historic centre of Merida and provides a welcome extension of the city’s public space.

“The design involved situating the Museum of Mexican Popular Music at basement level and raising the concert hall above street level, thus creating an open patio and roofed, urban-scale terrace.”

The building seeks to be both a catalyst for public space and a means of highlighting the surrounding architectural heritage. The aim is to strengthen residents’ identity, not only with the Palace of Mexica Music, but within the city core itself, injecting new public life and social experiences into the location.

The main challenge of the project was carrying out the scheme within the historical centre of the city, which is also very close to the first block of the old city.

Beda Guzman commented: “This project was very important because the city gained new public space in a scheme which generated an innovative approach to building within historical sites. This project is of great importance for me, as it is for the city of Merida.

“Recognition in the International Property Awards means having no limits. It means being able to push the boundaries of our national borders with our work.”

The project was completed in 2018. 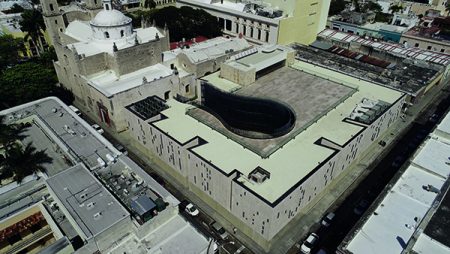