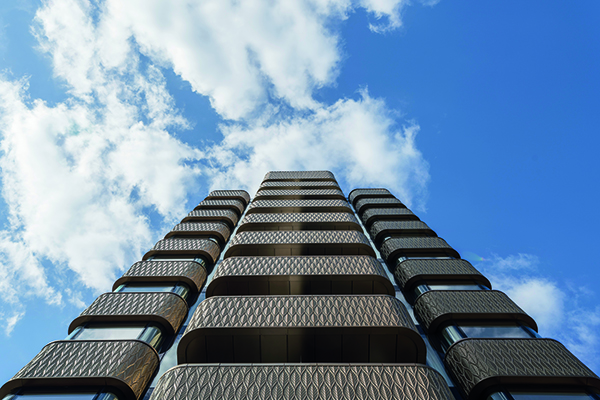 Marc Fleming from e8 Architecture told PREMIER CONSTRUCTION MAGAZINE: “Before it became apartments, the site was an old sorting office. We did planning back in 2014 for a small footprint of the site so it is now a completely new-build residential building. It has two levels of basement with an automated parking system in it and the rest are apartments.”

The surrounding area is characterised by mid-20th Century mansion blocks, the nicest of which are in the Art Deco style.

Marc added: “We were given a clear brief from the start and that was that it is a high-end, luxury development. Because it is in St John’s Wood and is neighbouring properties in that style, it was responding to that and the environment.”

The design of The Compton Building drew inspiration from the Art Deco form and the curved bays are one of the building’s signature features. Also, the imprint of a leaf motif is a modern interpretation of the Deco pattern with its precise geometry and clear lines.

Designed from the inside out, each apartment is internally planned to make the most of the views, the best of which are at oblique angles to the site. This led to the creation of the building’s characteristic articulated bays in elevation and ensures that every apartment is dual aspect.

The façade is both striking and refined. e8 Architecture made the decision to produce an exterior composed entirely of cast aluminium, evoking stature and longevity, as if carved out from a single block of metal.
Marc said: “The façade on the outside was developed with cast aluminium and we haven’t used any secondary support systems, it is all self-supporting.  We used the aluminium technology to be structural and give the building an aesthetic quality. We chose the aluminium because you can mould it and as a designer you are completely free to control it. But then because of the inherent properties of the aluminium, it is structurally sound and naturally it resists corrosion.”

e8 Architecture were able to mould the aluminium and carve bespoke patterns and textured shapes, producing a structure that is finely crafted, made from recycled materials, locally sourced from Essex and manufactured by a team of highly skilled tradespeople. As such, there is Provence between the resulting design and its manufacture. AT some distant time in the future, it will be recycled itself.

“This is the first time this type of works has been done on this scale,” said Marc.

The cast aluminium façade and the imprinted leaf pattern are unique to this project and a reference to neighbouring Regents Park. It brings the elevations to life, capturing the light and shade and the colour changes depending on the light conditions.

At ground level the building presents an open frontage onto the street, with a generous canopy welcoming people into the lobby. The ground floor plinth is clad in roman brick, giving the building a robust and beautifully detailed base.
Marc said: “Feedback has been really good. The client is very happy with the outcome, as are we. We have been getting a lot of attention for this project and have won a few awards for it. Everyone is really happy with it.
“Overall, for us it has been important because bespoke design and looking at new technologies and how we can push boundaries to create something that is different and interesting is what we like to do.”

UK Brick is bringing Scandinavian clay to London landscapes. And with the world’s most exclusive bricks to hand, their indulgent brick collections have quickly caught the attention of architects nationwide.

The brick supplier’s latest collaboration with Regal Homes has set a new precedent for London living. Say hello to The Compton; this prestigious development rubs shoulders with the Lords Cricket Grounds, and oozes understated confidence. The design plays with masculine and feminine contradictions, and The Compton perfectly encapsulates the new age of British architecture. The extraordinary design has been echoed in the materials chosen; each waterstruck brick tells a unique story, and collaboratively, they have harmonised into an unforgettable finish.

The architect’s vision was bold, and UK Brick responded. To achieve the unique curved frontage design, UK Brick developed an innovative radial brick. With the bespoke technical spec perfected, elongated Linear bricks in Mid Grey were selected. Surface texture, personality, and an indulgent design-led feel have fast made these bricks an architects favourite.

Be warned though, UK Bricks are anything but ordinary.

*Choose only for the most indulgent builds.