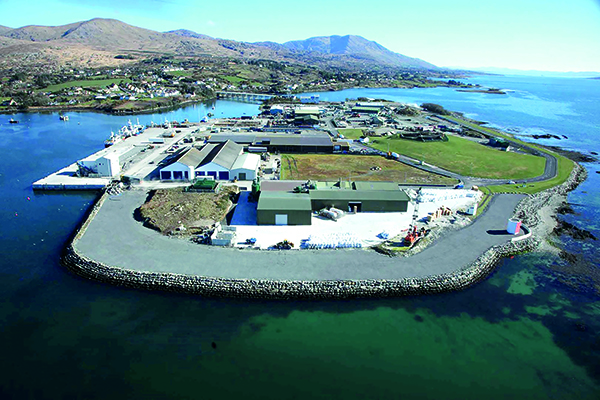 The creation of a new €23.5m, 216m-long quay development dramatically boosting West Cork’s fishing industry and hailed as ‘providing facilities on a par with the best in Europe’ is making good progress towards completion on Dinish Island, Castletownbere.

The project will double the workable quay space on Dinish Island and will enable significant expansion in fish landings, on shore processing and general marine activity at this major port.

The Department of Agriculture, Food and the Marine and RPS Group are working on the new quay, which is being constructed by main contractors Keating Marine and Civil Contractors. RPS Group are responsible for providing consultancy services for the project management and detailed design of the scheme.

According to the Department of Agriculture Food and the Marine’s Tony O’Sullivan and Noel O’Murchu, the scheme is on programme for completion in August 2020, with sheet piling and bearing piling just completed.

On the main quay structure, anchors blocks and anchor ties have been installed and the quay wall is being backfilled. The first of the main quay troughs were installed in February 2020 and 17% of the deck slab is completed. The services for the main quay are advanced with the oil line complete and work progressing on the other services including storm drainage and manholes, electrical, water mains and fire hydrants.

Tony O’Sullivan said: “Construction of the two breakwater arms at the outside of the harbour is 75 per cent finished. The project is going well and we are happy with its progress.”

The overall development includes: The construction of a new 216m long quay structure using a combination of steel sheet and tubular piles; reclamation and infilling of an area of approximately 0.9 ha/ 2.2 acres behind the new quay wall, and the dredging of approximately 57,000m3 of sea bed material adjacent to the new quay structure to form a 40m wide berthing pocket at a depth of -8.0m Chart Datum (CD).

In addition, the scheme involves reclamation of approximately 2.5ha of land adjacent to the existing Dinish Wharf to act as a quay/storage hinterland area, using a combination of imported rock and reclaimed dredge material; the provision of all water, electrical and fuel services, as well as a new drainage system, and heavy duty pavement surfacing to the new wharf/quay structure area.

Finally, the scheme requires the relocation of existing navigation lights and directional lighting; the revision of security and access arrangements for quay facilities including the provision and installation of ISPS approved fencing and CCTV; construction of a new flexible paving access road, and the provision of quay furniture and all other associated marine facilities and services.

The scheme has presented numerous challenges, including its design and layout. Tony O’Sullivan said: “The layout was designed to take account of working within the constraints of an operational harbour, we had to ensure that the works could be constructed without impacting the existing harbour operations and neighbouring businesses”.

“The design also considered the project in terms of sustainability, particularly given the remote location of the works. The dredging and reclamation works were designed to reduce the amount of material transported off site, this was achieved by reusing the dredge material as fill within the works.

“One of the main engineering challenges of the project has been the excavation of very hard rock, which delayed the pile driving. This was overcome through the provision of an additional dredger and rock breakers.

“Circular cells were used in the construction of the breakwaters, and this was quite an innovative move which also posed some challenges – all of which were overcome.”

He added that the project has gone very well, with good co-operation between Keating Marine and Civil Contractors and RPS.

Tony O’Sullivan commented “This project is very important to the local area and will greatly help to relieve congestion in the harbour – a fact well understood by the local fishermen who have been highly co-operative with the harbour master and his team throughout the works, during which the harbour has remained fully operational. The fishermen are certainly looking forward to completion of the project which will help make their work more comfortable and productive.”

It is also expected that the project will lead to an increase in the use of the harbour by other EU fishing vessels.

In addition it is hoped that the development will provide more scope for fish processing operations in the area, leading to a boost in jobs locally – an important factor in what is a fairly remote area.

Tony O’Sullivan concluded: “All of the works are being carried out in close consultation with the locals, who are very happy with the scheme.”

Commending the development, Ireland’s Minister for Agriculture, Food and the Marine, Michael Creed T.D., said: “I view this project as a testament not only to this Government’s support for the Castletownbere fishing industry and the ongoing development of the wider seafood sector, but also to our commitment to the social and economic development of rural coastal communities.

“When completed, the new facilities will be on a par with the best in Europe, and will significantly drive forward the fishing industry and local economy on the Beara Peninsula and allow for a major expansion of the seafood support sector and other marine-related industries in the South West. The expanded landing facilities and increased quay space will also provide opportunities for further economic diversification.” 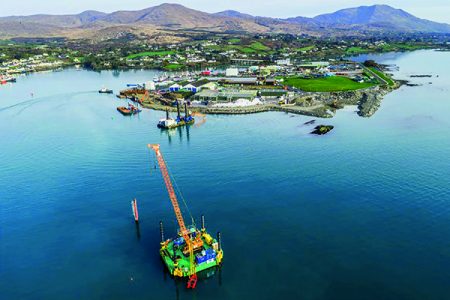