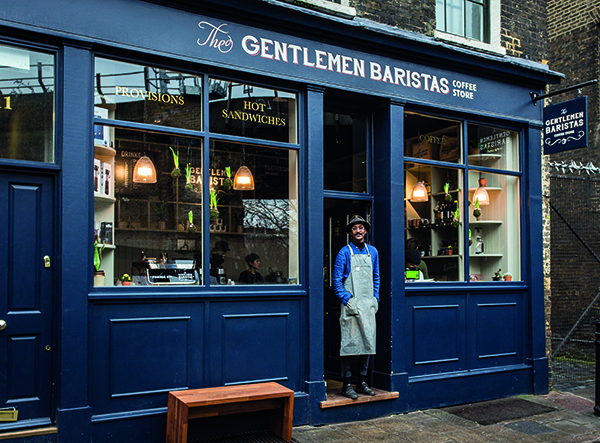 The Hammersmith branch is open Monday to Friday, serving coffee all day, from 7am to 5:30pm, catching the early risers to those who like an afternoon top up.

PREMIER HOSPITALITY MAGAZINE spoke to Alex Woolf from Romulus, the developer responsible for developing the multi-use building that the new venue is in.

“We bought this building about two and half years ago and we needed to increase the activity and liveliness of what was a dated and corporate space. We opened the building up and put in new design and finishes in to make it have more of an industrial modern feel. We also wanted to add some specific pieces like a café.

“We spent a while talking to different operators and then about nine months ago we met The Gentleman Barista team. We had a look at their other sites, which had been integrated into office building reception areas, and were very impressed.

“One of the things we didn’t want to do was just shove in a Starbucks or Costa, or a very separate café unit, we really wanted to have something that was really open and integrated into the space that we’d designed, so choosing a brand operator that were interested in what we were looking at was really important.”

Over the last six years, The Gentlemen Baristas have captured the coffee cups of London with its promise of expertly executed blends and single origins; their love of coffee is clear. The brand’s first and primary aim is to showcase coffee at its best, and the great wealth and variety of speciality coffee available today. Each coffee is eccentrically named after different types of gentleman’s hat, and includes, ‘Stovepipe’, originally from Brazil, complete with notes of blueberry, marzipan and blueberry tart; the unique Kenyan ‘ Bowler’ with hints of cherry cola, blackcurrant and white grape; or the ‘Pretender’ decaf from Guatemala, containing notes of caramel, dark chocolate and cherry. The Gentlemen Baristas’ entire range is available for purchase online and in all their coffee houses where knowledgeable baristas are on hand to guide coffee lovers through which bean to buy.

Alex continued: “Gentleman Baristas were the perfect brand for this site, with their high quality coffee and quality food and we’re happy about how it’s all come together. The design fits together really well. The building used to be black marble columns with lots of shiny finishes, like a dated 80s reception, and now we have lots of exposed concrete, wooden floors, exposed ceiling, and a lot of colour in the furnishings. It gives it a livelier dynamic feel.
“We also run a co- working space called Huddle and we’re working with Gentlemen Baristas to cater to the events we run there. They can bring out their food and coffee to them, and we’re very excited about how our relationship is going to grow in the future.

“Working with them has been hugely important because it’s often the first thing people see when they come to the building. So many reception spaces feel so cold and dead, but here there’s such a nice energy to the space, and you can sit in and enjoy a high quality coffee. I think it has made a difference to the Hammersmith area too; presenting a brand that isn’t one of the big chains.  The feedback we’ve had from our occupiers in the building has been hugely positive.”

The Gentlemen Baristas will be shortly following number 10 with two further central locations later this year, which area Mayfair branch, popping up in March and a Victoria site will be landing in May.

To find out more, go to: https://www.thegentlemenbaristas.com.