Proudly scooping his first NHBC award, David Wilson Homes site manager Richard Cadman is “absolutely elated” with his success, which he puts down to having the right team and being able to motivate them to win.

“I set my heart on winning the award and it certainly wasn’t easy – the team are also really pleased and winning the award has meant a lot to them too. In today’s competitive housing market you need something to make you stand out from the crowd and this award certainly helps” he added. He is particularly appreciative of the help of his contracts manager Wayne Morris, without whose guidance he says he could not have won the award.

Richard, who started his career as a joiner, has been in the building trade since leaving school many years ago and comes from a family who has been involved in the construction industry, including his father who was a construction director when Richard first started work. His fiancée also works for David Wilson Homes a sales negotiator.

“I was lucky that I could take advantage of the chances I got in my career and worked hard and made the best of them” said Richard.

And still on the subject of awards, for the second year running, David Wilson Homes is officially the highest quality major national housebuilder, having been awarded an exclusive ‘5 Star Housebuilder Award’ by the Homebuilders Federation.

The award is the result of recommendations from customers as well as the company’s superior build quality, so they are especially proud to be the only major national housebuilder to be awarded this accreditation two years running.

With its stunning house types and sought-after area, Serenity @ Lakeside offers something for everyone. The location and amenities in the area are second to none, with the Lakeside shopping centre and Doncaster Dome, the UK’s largest leisure, sporting and event centre right on the doorstep. 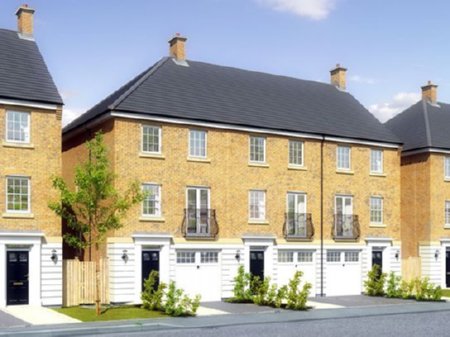 The site includes an impressive range of 250 properties, including luxury apartments and three- four- and five-bedroom houses, all overlooking a lake in an exclusive area of Doncaster.

Currently the site is one of the company’s best-selling developments in the Yorkshire area.

David Wilson Homes is dedicated to creating the highest-quality homes to be lived in and loved. At every stage of the process, from designing new communities to fitting their luxurious carpets, the company has a picture of the family that will call their state-of-the-art houses, ‘home’. It is this focus on excellence and family that has been at the root of David Wilson Homes’ success for over 40 years.

The company is based in a small village in Leicester and today is recognised as one of the country’s leading house builders, operating in 13 regions across England, Scotland and Wales.

In 2007 David Wilson Homes became part of the Barratt Developments group – a natural merging of two companies dedicated to providing the highest standard of design, construction and customer service in the business.

Barratt was established in 1958 in Newcastle and has enjoyed an unrivalled track record of consistent growth ever since. In recent years, Barratt has won every major industry award going.

The company has sold over 300,000 new homes around the country and are leaders in design, urban regeneration, social housing and innovation. Barratt currently sell over 15,500 new homes a year and are building on developments from Aberdeen to Plymouth, helping to meet housing demand in towns, cities and rural areas. The company builds for all kinds of buyers, from first-time buyer apartments to family townhouses to luxury penthouses, plus homes for rent and shared ownership.