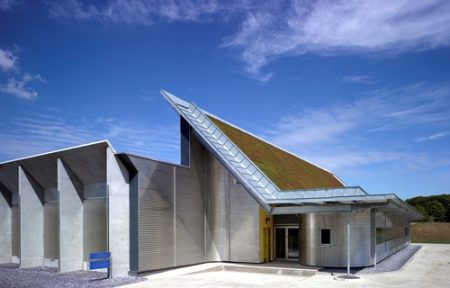 Completed in December 2011, the new British Film Institute (BFI) store in Gaydon, Warwickshire, has been applauded by RIBA judges.

The state-of-the-art building is the result of intense research and collaboration between Edward Cullins Architects, engineers, film experts and the BFI. The £12 million project was realised through the Screen Heritage UK (SHUK) programme, a nationwide initiative funded by the Department of Culture, Media and Sport.

Under the project, main contractor Gilbert Ash constructed a 3000m² centre containing 30 identical cellular vaults for nitrate film, and 6 vaults for acetate film. Designed to store the collection of film for 50 years or more, the vaults will keep store up to 460,000 canisters of film in cold and dry conditions of -5°c at 35% relative humidity. 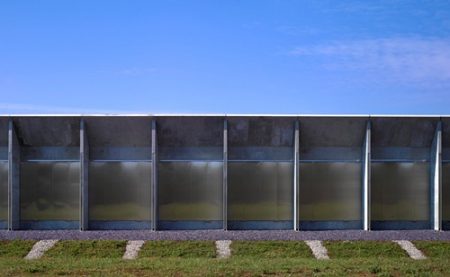 Precast concrete panels provide the thermal mass required to limit temperature fluctuation, whilst the building is wrapped with a continuous vapour barrier that prevents moisture ingress and interstitial condensation. This layer assists in meeting the air-tightness of 0.28m³/m²/hr@50pa, which equates to 0.03 air changes per hour. This is 97% better than minimum building regulations and 70% better than an even an exemplar low energy building.

Edward Cullins Architects’ design is deceptively simple. The central concrete store room is flanked by the entrance and offices at one end of the building, and services at the other. Externally, the office and service areas are expressed with stainless steel cladding, which contrasts the steel blast door facades of the main store.

“The archive could have been a serviceable oblong of concrete bunkers, but this is more ambitious. In plan, elevations and material detailing, the archive’s design draws from both a stripped-down industrial modernism and a very particular kind of 21st century finesse and environmental delicacy.”

Estimates predict that the energy consumption of the new building will be less than 1,200,000 kWh per annum, which will in turn save over £330,000 in annual energy costs and over 1,500 tonnes of carbon when compared to the refurbishment of the existing 1979 and 1999 buildings to the same environmental conditions. Furthermore, the building will save over £78,000 and 368 tonnes of carbon when compared to a 2006 Building Regulations compliant building.

“We are amazed how this very unusual building has captured the imagination of so many, and we are honoured to be shortlisted for so many industry awards. Even nicer is winning, as we did recently at the RIBA Awards ceremony in Leicester.

“I think that the very challenging brief of how to store so much film – particularly volatile nitrate film – meant the team had to truly collaborate, or we would fail to find the best solution.

“Through an intense design process, testing many options, we were able to settle in the optimum solution. It then became a sort of virtuous circle because we had found a successful method of communicating and satisfying ourselves that each move was correct.

“The building is an expression of the function, but it has been lovingly crafted. We enjoy the detail of how materials are assembled, and the BFI let us do what we do best.”