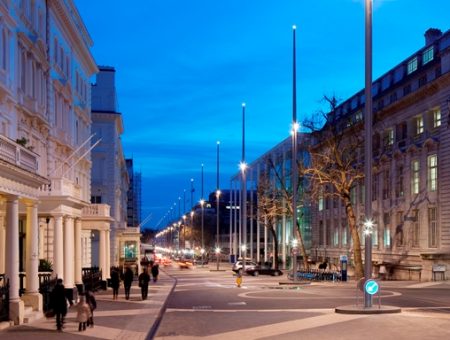 Exhibition Road stretches from South Kensington to Hyde Park and covers an area of 26,000 square metres. The road comprises a combination of museums – including the Victoria and Albert Museum – and universities.

The £25 million project was implemented by The Royal Borough of Kensington & Chelsea, Transport for London (TfL) and Westminster County Council in order to transform the existing road into a pedestrian friendly world class cultural destination.

The innovative scheme comprised the installation of 16,700 square metres of granite to dramatically transform the existing road into one large shared surface that favoured pedestrian access over traffic requirements. 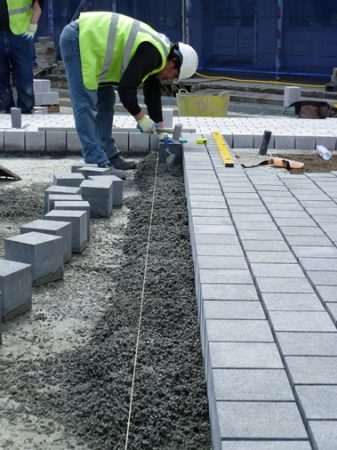 Balfour Beatty Civil Engineering Ltd Southern Division was the main contractor on the project and Schal was the project manager. Arup was the structural engineer, Davis Langdon was the quantity surveyor and Woodhouse was the lighting consultant.

The project was designed by Jeremy Dixon and Edward Jones from Dixon Jones Architects, whilst Sarah Rubinstein was the project architect. Project Centre Ltd was the design engineer on the scheme.

“Exhibition Road hosts a world-class and unique collection of museums, performance spaces and universities all in one area. However, it had become quite clear that this area of London was considerably under recognised as a public place. 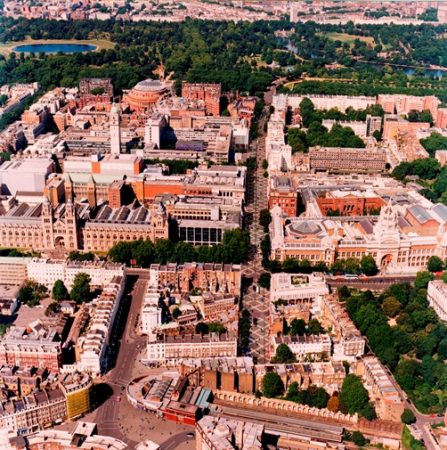 “A number of projects over the years have attempted to correct this oversight, but they have never really got off the ground. The idea behind this design was to create a shared surface that would introduce a continuous space with no major distinctions between the pavement and road. Although traffic can still move freely through Exhibition Road, there is now a greater emphasis on pedestrian usage.

“Dixon Jones Architects was selected as the architect on this project because we put forward a simple design that matched the ambitions of Councillor Daniel Moylan, who was a key driving force in this project. We worked with Councillor Moylan to address the concerns with Exhibition Road and, working together, we were able to devise this scheme.”

Construction work began on the project in January 2010 and was completed in December 2011. Whilst work was being conducted, Exhibition Road was divided into two in order to allow traffic to access the road. 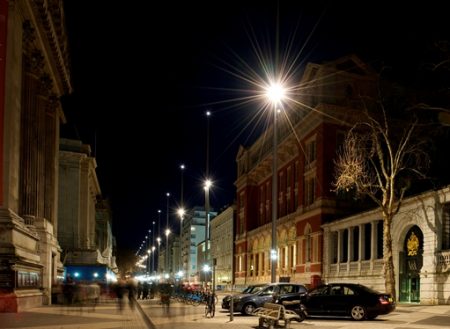 The ground was excavated and a concrete base laid, with Chinese black and pink granite installed using the SteinTec mortar system. Stainless steel restraining strips and lamp masts were then installed, which in turn run through the centre of the route. The lamps provide an interesting design feature during the day as well as much needed illumination throughout the night.

SteinTec supplied specialist bedding and jointing mortar for the 16,700 square metres of granite setts installed on Exhibition Road. SteinTec’s technical director, David Burton, provided expert engineering advice from original concept through to completion in order to ensure that the project was designed and constructed to the most stringent requirements of British Standards BS7533.

“We worked closely with the team on this project and provided most of the technical specifications and method statements for the paving. Our bedding and jointing mortar was used throughout the project due to its high performance for heavy trafficking.

“Exhibition Road was an extremely important project for Dixon Jones Architects and we were absolutely delighted to be a part of it. This ambitious project owes a lot to the power of the people, who have been pushing for its creation. Everyone that has been involved has really helped to bring this together.”

“We are always very pleased to be recognised for a RIBA Award. We have received a number of awards over the years and this just further cements our commitment to our work.

“What I think is important about this award is that it has not been given for a building. This award recognises the space that exists between buildings. Increasingly the architectural profession is becoming more aware of the importance of how buildings relate to one another and I think Exhibition Road emphasises this perfectly.”

Project Centre is a registered landscape architecture practice, public realm and transportation consultancy providing its clients with the skills to bridge the gap between concept and construction. The company was a lead highway, traffic and lighting engineer for the Exhibition Road scheme forming a vital interface between design and delivery.

“One of our roles was to maintain the design integrity produced by Dixon Jones Architects and to transfer this into a deliverable scheme. We unravelled the one-way system around the site to enable the larger scheme, produced detailed designs, supervised many aspects of construction, even seconded staff to the council to supervise consultation and publicity.

“Exhibition Road pushed the boundaries of the design philosophy in a busy London street. It was a very significant project, not just for us, but for London, Transport for London and the Borough.”