Rotherham United’s new state-of-the-art stadium is set to put the team, known by fans as ‘The Millers’, on the map when it is completed at the end of July 2012.

Situated on the former Guest and Chrimes foundry site in the heart of Rotherham, the 12,000 capacity stadium will also incorporate exhibiting and banqueting spaces for around 600 corporate guests. All events at the New York Stadium will be managed by The Lindley Group.

“The New York stadium is a venue for the people of Rotherham to come and enjoy and engage with. It will be at the heart of the local community and we want everyone to join us and be part of something really special.

“I can’t wait to welcome everyone to this fantastic stadium and share what has been a dream of mine for many years. All local people can be part, supporting the stadium and bringing your business and support back to Rotherham United.

“The support that Millers fans have shown the club has been fantastic and is reflected in the number of season tickets we have already sold. The stadium really is the future of Rotherham and these are very exciting times for Rotherham United.”

The twelve-month turnkey project began in July 2011 with Gleeds as the project manager and GMI Construction as the main contractor. S+P Architects were selected as the preferred bidder in February 2011 following a competitive design process.

The island site is flanked by the River Don to the east and the railway line to the west. To the north is the new 172,000 sq ft Rotherham Civic Centre and to the south is the spectacular New York Stadium.

S+P Architects’ innovative design has fused the traditional vernacular of the existing Guest and Chrimes site with a decidedly 21st century perspective, as Mark Gowdridge from S+P Architects explained:

“We have incorporated brick work around the perimeter of the building at the lower level, which ties in with the Guest and Chrimes building. The higher level in turn features cladding panels with a mixture of architectural block work to define the main entrance.

“The roof is particularly interesting, as we have implemented a coffered standing seam roof with polycarbonate sheets. Stepping down from the main west stand towards the river, the roof allows natural light to penetrate the stands, which will defrost the pitch in winter. In addition, an acoustician was brought in to ensure that all of the fain noise is contained within the grounds and is instead amplified onto the pitch – creating a very exciting atmosphere for players and fans alike.

“This has been a challenging project for us due to an extremely tight programme. Normally it is possible for projects to slip slightly, but with the season’s kick off already scheduled this is simply not an option. As a result, we have had to significantly increase our resources and work closely with the client to make sure that all deadlines are adhered to.

“Despite this, it has been one of the most interesting projects that we have worked on. A lot of our team hadn’t worked on a stadium before, so this is an exciting new sector. Furthermore, the club has been very open to suggestions and has allowed us to put our own stamp on the building. It really is very exciting to see that the building we had at design stage is being realised.” 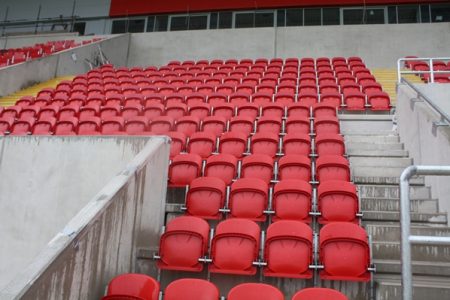 In addition to the state-of-the-art stadium, the site will also include the exclusive 1925 Club, which will set the standard for corporate hospitality.

Heralding a new era in matchday experiences and entertainment, the club will offer world-class facilities and five-star dining in a la carte restaurants. The Platinum, Silver and Gold packages will boast the best seats in the stadium, whilst lucky members will also have access to every game and the stunning lounge, bar and restaurant facilities. VIP parking will also be available.

“These are exciting times for Rotherham United. From entertaining clients to simply relaxing and watching the game with friends and family, our match day hospitality has been designed to provide a first-class experience in terms of comfort, enjoyment and flexibility.”

“Whether it is season-luxury or inviting friends or colleagues for a special occasion, we have designed facilities and packages to cater for every requirement.”

The new stadium has already won the support of loyal Millers fans, who have flocked in their thousands to buy tickets for the new season.

“It looks like Rotherham United really will be the hottest ticket in town next season. We have received an incredible amount of phone calls from current season ticket holders keen to attend our presentation events, some of which are now fully booked.

“We would encourage anyone who hasn’t already done so to contact the call centre to make an appointment.”

“We are encouraging more children to come and watch the Millers with outstanding offers on season tickets in the Ben Bennett Family Stand, where every full paying adult can bring all their own children under the age of eight for free.

“This stadium will bring huge change and enhance the match day experience for all, be it children in the family stand, businesses and VIPs in the 1925 Club or season ticket holders.”

Two of the stadium’s biggest fans are Paul and Barry Elliot, stars of the long-running BBC comedy ChuckleVision. The brothers are lifelong Rotherham United fans and honorary life presidents of the club, and tried out the first seat at the stadium during a visit in March 2012.

“I don’t think there’s a better stadium in the country. It can only be good for the community in Rotherham and the football club and we can’t wait for the first match here. It’s great to see the progress – it’s really coming along and it’s going to be very special.”

BarhaleWSP provided the design and construction of the diversion of a public combined sewer which was located beneath the new football pitch; including a manhole which was virtually on the centre spot.

This involved the abandonment and subsequent construction of nearly 400m of sewer working within a very constrained site alongside the principal contractor building the stadium and underneath the Centenary Way overpass.

An existing sewage pumping station and rising main were utilised and in order to avoid potentially extensive and prolonged upgrading works, a new 100m3 online storage tank was constructed to cope with the additional flow from the 12,000 seat stadium.

Working to a tight timescale the diversion has been substantially completed, allowing Rotherham Football Club to kick-off the new season as scheduled without the possibility of a collapsed sewer affecting their schedule – as it once did at Liverpool FC in the late ‘80s.

GL Events Slick Seating provides all aspects of spectator facilities, from the design and construction of complete stadia to discreet seating packages for a whole range of venues.

The company is currently working on 12 venues for London Olympics 2012 as well as having a portfolio that includes many Premiership rughby and football clubs.

“GL Events Slick Seating is proud to have supplied Rotherham United with the seating for the New York Stadium development; the sports spectator quite rightly is becoming more and more demanding in the area of comfort.”

“We pride ourselves in being able to accommodate that demand at a reasonable cost and our effective project management ensures the Club’s demands for delivery are met.”

“At the Olympic Park Stadium we are supplying a mix of seat venues from 2,000 to 20,000 and in all shapes and sizes. We are very proud of our ability to respond to our clients’ needs.”