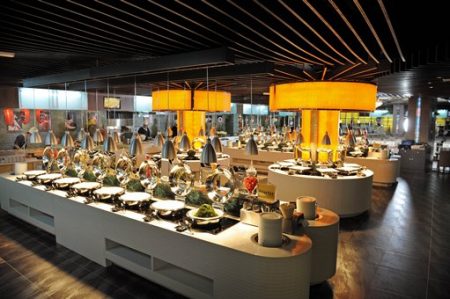 Located just a stone’s throw away from China Town on Portland Street, Tops Manchester is an exciting new buffet restaurant. Serving up an impressive array of more than 300 dishes, Tops Manchester provides diners with some of world’s most mouth-watering delights in a luxurious setting.

The £1 million restaurant is housed on the site of a former nightclub and is the latest eatery from restaurateur Robin Wang. Tops opened in June 2012 and it is hoped that this will be the beginning of a long line of high-end buffet diners in the UK.

“I’ve been in the restaurant business for over 20 years, mostly in London, the South East and South West – and it now seems the right time to expand into the North West. Tops Manchester is our baby and it is the first restaurant to use the Tops name. The plan is to branch out nationwide, using this as our starting point.

“It has been a lot of hard work to get the restaurant off the ground, but all of our efforts have paid off and it is great to see us now open for business. We saw the potential in this site and it is now a reality.” 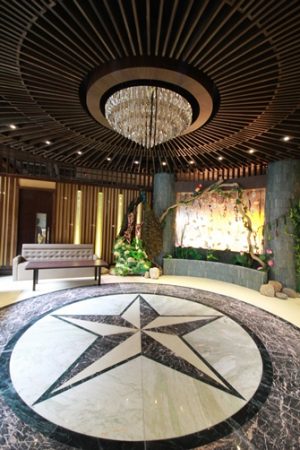 Work began on creating the 400-cover restaurant in November 2011 and the project was completed in June 2012. Pam Construction was the main contractor on the project and ArchNova Architects Ltd was the architect.

Upon entering Tops Manchester, diners are greeted with a stunning reception area that includes marble tiling, a radial ceiling, a fully functional waterfall and a collection of decorative exotic animal statues.

The reception leads into the main diner, which comprises four buffet counters that serve a variety of starters and main meals, a drinks bar, a two-tier sushi counter on a conveyor belt and a live cooking counter. 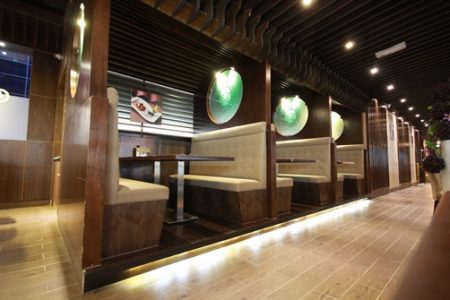 The live counter measures an impressive 22 metres in length and serves up a variety of culinary delights including Indian, Italian, Thai, Japanese teppanyaki and Malaysian food. All of the delicious dishes are prepared live by skilled chefs, allowing diners the opportunity to see exactly how their meal is prepared.

“Tops Manchester raises the standard for buffet style eating by presenting a very unique way of dining. We have incorporated the live cooking counter to give diners something more than just a place to eat, as we believe it adds a theatrical aspect to each meal.

“The live cooking counter creates a performance area that encourages diners to interact with the whole dining experience, which in turn creates a very unique social destination.” 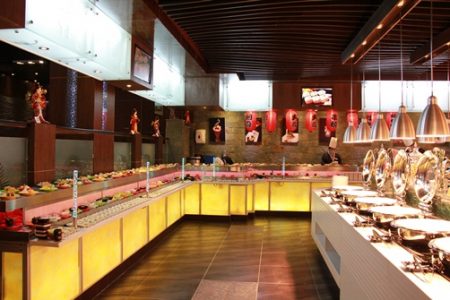 The restaurant incorporates a mixture of traditional Chinese decorations – including porcelain tiles and paper lanterns – with fully functioning equipment such as hot plates, heat lamps and even label placards for individual dishes.

A subtle use of lighting has also been incorporated, which helps to define each dining area as well as create the atmosphere. LED spotlights and warm amber light boxes provide some illumination, whilst a glass banquet above the life cooking counter provides additional lighting. The light boxes also help to cleverly conceal two pillars that are located behind the buffet counters. 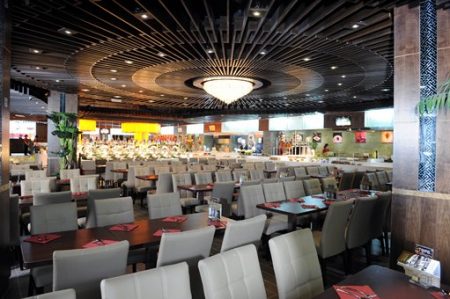 “The concept for Tops Manchester was to infuse a number of modern Oriental styles that would differentiate this site from the more traditional Chinese buffet restaurants. The majority of the materials we have used were shipped in from China, which has helped us create an eatery that would still be instantly recognisable to diners. The feedback so far has been great and we are pleased that our design concept is altering people’s perceptions of buffet dining.

“Working on this project has meant a lot to me. It was my first time working on a project of this scale so it was a great opportunity to be involved with Tops Manchester. I am very grateful to Robin Wang for allowing me to be a part of this restaurant. We had a great team and I’m confident that this restaurant will be a huge success.”