Yoobi Sushi on Lexington Street is London’s first Temakeria and comprises a takeaway counter and an intimate dining space. The restaurant serves fresh sushi wrapped in a cone and opened its doors for the first time in June 2012.

Gundry & Ducker was responsible for all of the interior design work on the restaurant, whilst Ico Design oversaw all of the branding and graphics.

Yoobi Sushi is housed within a five-storey building and occupies the ground floor and basement levels of the site. Whilst the basement level accommodates the back of house operations – including staff quarters, wash rooms and offices – the ground floor is where all of the action takes place. Comprising a prep kitchen and retail space, the ground level of Yoobi Sushi provides 15 covers and is the busiest area of the restaurant.

The site was stripped back to basics and then rebuilt maintaining all of the original brickwork. The bricks were painted grey to provide the backdrop, whilst dashes of colour were injected into the site to create an interesting and unusual mixture of light and dark. An angular patterned design scheme was then incorporated across the table tops, whilst brass light fittings were installed to look as if they had risen out of the ground.

Additional features include glass bowl light fittings, a beverage cooler and wooden panel finishes. The panels also merge with the seating to create a quirky yet intriguing mix of styles that reflect the cross cultural influences of the Yoobi Sushi brand. 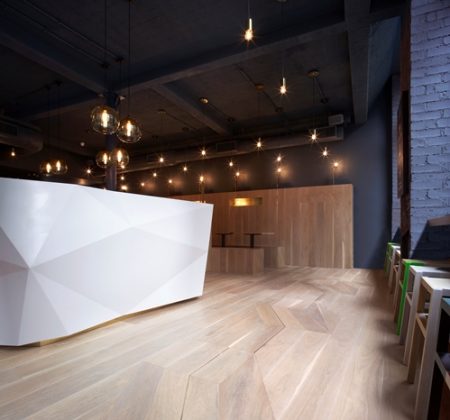 To complete the work on the restaurant, a white crystalline sushi bar was installed to create a central hub for the site.

“In Brazil there is a large second generation Japanese community who have been developing this very unique type of cuisine. It is very much ingredient led, and this is what the Yoobi Sushi brand is all about.

“Gundry & Ducker were involved with Yoobi Sushi approximately 18 months before work began on transforming the site. We have taken our influences for this site from a number of different locations and we have played around with three dimensional shapes to create a very unique layout.

“This is the first in what will become a small chain of Yoobi Sushi throughout the UK, so it was very important that we got this one right.”

“Everything ran smoothly on the project and although it was quite a lengthy programme of works for a conversion of this type, it came together perfectly.

“It’s interesting to watch the site now that it is open. Business has been doing well and it really seems to have gotten into its stride. I’m starting to see a lot of the branded Yoobi bags cropping up all over London, so I know that word of the restaurant is starting to spread.”

Established in 1979, Hakwood is a world-leading manufacturer of high-end hardwood flooring. The company specialises in wide-width, long-length flooring and all of Hakwood’s projects are designed to meet the requirements of designers and architects worldwide.

Hakwood hardwood flooring has been used in a variety of projects including the Mandarin Oriental Hotel in Barcelona, the JFK Lounge, Millionaire Fair in the Netherlands and Yoobi.

“At Hakwood we embrace challenges. We have the technical skills, the experience and the creative spirit to design and make THE flooring to fit any interior.”

“With Yoobi we saw how involved and passionate the owners were about their project and at Hakwood we feel the same way about our flooring.

“At Hakwood we work directly with the design and construction team to produce and deliver flooring solutions with the correct specifications within necessary timeframes and budget.

“It is a pleasure that our flooring was the choice for Yoobi. It is a great visual showcase for our product.”