Pennine Bridleway is a purpose built National Trail in the North of England aimed at horse riders cyclists and walkers. The 320 kilometre route is the first long distance bridleway to be constructed in theUKand stretches from Derbyshire through to Cumbria

The last construction works are currently underway to improve a 500 metre section of the bridleway at Swineley Cowm – a remote section 500 metres above sea level. The work is to form a more user-friendly track over a boggy peat section of moorland.

The technique of sub soiling was used to raise the track above the existing ground level by using underlying sub base material (clay and stone) won by forming a drainage ditch to one side. The work was undertaken to form a harder base and addresses drainage issues. The track will be topped off with 200 tonnes of dust limestone aggregate which will be flown in by helicopter. The stone will be laid on the track base and compacted down to create a durable surface.

Work initially began on the construction of the 83-kilometre Yorkshire Dales section of Pennine Bridleway in 2003 and the main body of work was completed in 2011. The project is funded by Natural England, who has also provided funding for the recent maintenance works. 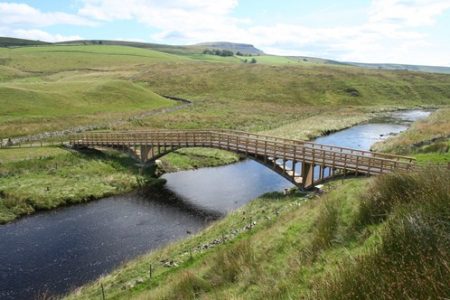 Throughout the development of the Yorkshire Dales section of Pennine Bridleway, a number of contractors have helped to shape the important route. Dinsdale Moorland Services was responsible for a number of route restoration works including Cam High Road, Gorbeck Road, Arten Gill and BW 56; whilst Marsden AES was responsible for the restoration of routes including Far Moor, Austwick Garsdale, Stainforth and Banks Lane Settle.

There are no major works remaining on the Bridleway, however additional maintenance works will continue to take place as and when necessary.

“The development of Pennine Bridleway dates back to 1986, when a group of horse riders lobbied Parliament for a long distance route. After a lengthy process involving Secretary of State approval, work eventually got started on developing the track and the majority of work reached completion in 2011.

“Essentially our role at Yorkshire Dales National Park Authority was to implement the route on the ground on behalf of Natural England by carrying out extensive restoration and improvement works.

“Additionally we have created and constructed 12-kilometres of brand new bridleway to connect the existing sections where there were no bridleways.  The new sections have required legal agreements with Landowners and farmers and as the new sections cross the Settle Carlisle railway at three locations, agreement had to be reached with Network Rail to use underpasses and bridges.

“The new sections of bridleway have required detailed planning applications including commissioning supporting reports on archaeology, ecology and Highway safety.

“The Bridleway gets a great response from the public and is well used. There is a section that we have not worked on during the project and has deteriorated with the heavy rainfall over the last winter but we will be addressing this in the near future’’

“The Pennine Bridleway runs through a relatively remote area of the country, as well as providing a route for users to enjoy it’s a way of bringing much needed income into the area with many new and existing businesses benefitting from its construction.

“A lot of work has gone into this project and it is great to know that after all this time the route is now open for people to enjoy.”

Dinsdale Moorland Services Ltd is a specialist contracting company with extensive knowledge and expertise of working in environmentally sensitive areas. From the upland moors to the lowland mires DMS undertake extensive habitat restoration works, helping to restore nature’s balance.    DMS offers a complete and integrated portfolio of services to both the public and private sector, including estate/forestry tracks to public rights of way works/infrastructure; mountain bike trail design and build; and comprehensive GIS mapping, geophysical surveying and consultancy services.

On the Yorkshire Dales Bridleway project, DMS re-surfaced the bridleway and created subsoil tracks as part of the infrastructure surfaces, and installed access furniture.

“Being a Yorkshire company we were extremely proud and honoured to work with the YDNP on such a prestigious project.  The Yorkshire Dales Bridleway was a large project in terms of the length of bridleway – in total we worked on around 20 km of track, but we pride ourselves in our capabilities and our positive ‘can do’ attitude. “