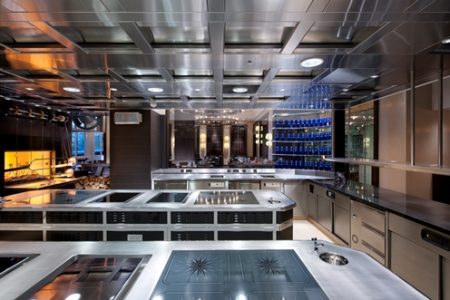 Over the last three years, SeftonHornWinch has developed a stellar reputation for providing specialist designs for a range of high-profile clients within the food and beverage industry. Their success is set to be cemented after the triumphant completion of projects at London’s Brasserie Zédel and The Delaunay.

The company was formed in spring 2009 through the amalgamation of Ken Winch Design, Creative Kitchen and Restaurant Concepts and Gareth Sefton, formerly of Tricon Foodservice Consultants.

SeftonHornWinch specialises in the design of food and beverage support and service facilities, from initial concepts and detailed design all the way to completion. Its impressive list of clients includes: Rex Restaurants, The Fat Duck Group, Mandarin Oriental Hotel Group, Barclays, Royal Bank of Scotland, Deloitte and Stonehenge.

Along with their work on the recently completed Brasserie Zédel, SeftonHornWinch worked alongside Rex Restaurant Associates on The Delaunay.

Named ‘Best Restaurant of the Year’ at the Tatler Restaurant Awards 2012, the 170-seat restaurant features two private dining rooms to seat up to 24 people, and The Counter – an attractive takeaway and deli.

The Delaunay boasts a stunning interior that features green leather banquette seating, wood, metal, brass and mirrors. All of the graphics have been designed by King Design, including the cast-bronze signs applied to pillars at the entrance and the hand-lettered wording on the windows of The Counter.

SeftonHornWinch worked closely with designer David Collins Studios in order to create the hot display at The Counter, whilst their main challenge was to create a restaurant kitchen in the basement that would be capable of handling up to 1500 covers a day. Whilst this may have been a challenge for some companies, SeftonHornWinch has extensive experience in designing such kitchens: their kitchen at The Wolseley caters for 1,300 covers per day, whilst Brasserie Zédel targets 2,000 covers per day.

Commenting on the efficient design of the kitchen, Head Chef at The Delaunay, Lee Ward, said:

“Chefs worry about the kitchen being too hot and badly lit, but there’s no problem with this kitchen as we have a larger proportion of electric to gas equipment, which keeps the heat down.”

SeftonHornWinch has also completed work on the Dinner by Heston Blumenthal restaurant at Mandarin Oriental Hyde Park, London. The restaurant won ‘Best Restaurant of the Year’ at the Tatler Restaurants Awards 2011 and was awarded 1 Michelin Star in the

“It had a large ‘show’ element, and with all the world’s eyes on it, it was vital that service ran smoothly. It was essential that the kitchen had to be efficient so that everyone would stay calm.”

As part of the design process, Gareth Sefton even went to work at the Fat Duck, as Head Chef at Dinner by Heston Blumenthal, Ashley Palmer Watts, explained:

“He needed to understand what we were doing, the work flow. He got to know what I needed, and, when it came to designing the kitchen, it meant that he could ask the right questions.”

The project included the introduction of induction hobs to reduce the heat of the kitchen, which in turn minimises the need for extraction and creates a quieter, calmer working space. A fridge has been installed in the centre of the pass to enable ingredients to remain fresh for longer, whilst dipper wells with running water and a ‘tab-grabbing’ system have also been incorporated.

“A continued relationship with a highly admired client such as Rex Restaurant Associates, headed up by Chris Corbin and Jeremy King, means that we are working at the highest level. Hopefully other restaurateurs will see this and want us to work with them too.

“Our mission statement is ‘to have an eye for and attention to detail’. We pride ourselves on putting the client’s needs first and foremost, and we strive to achieve perfection when creating efficient working kitchens.”