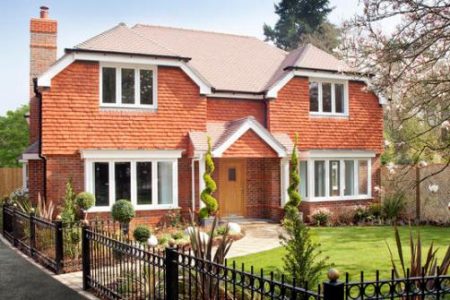 On June 22 NHBC announced the names of over 400 top achieving site managers who were recognised in the first round of the Pride in the Job Awards 2012. Names were shortlisted from over 13,000 UK site managers who have all excelled in their field over the past 12 months.

For 32 years the award has been the driving force behind the production of top-quality homes in the UK.

The completion of CALA Homes’ development at Morningside, Virginia Water has been met with praise by CALA Homes’ project manager and NHBC Award winner Terry Holmes.

Discussing the completion of the project, Terry Holmes said:

“Morningside was a genuine team effort and the completed work perfectly demonstrates the excellent teamwork that was employed by me, my team of sub contractors and CALA Homes head office.

“From digging the first footing to putting the finishing touches of paint on the walls, the quality of the work that we have undertaken has been second to none and it can be seen in the finished product.”

The luxury housing development was funded by CALA Homes – who also acted as the main contractor on the project – whilst Ashby Design Ltd was the architect.

Work began on Morningside in August 2011. Prior to work taking place on the site an existing house was demolished to make way for the new development.

The new homes were built using traditional construction methods of brick and block, with internal metal stud partition walls, UPVC windows and tiled roofs. Whilst each building is similar in design, the external facade of each property varies slightly and includes a mix of cladding, brick work and oak beams.

Additional features at Morningside include an impressive staircase, subtle downlighters, solar heating, a conservatory incorporating a mix of heat reducing and self cleaning glass and electronic garage doors.

Security alarm systems have also been fitted to each property to enhance security.

An extensive landscaping and planting scheme was also included as part of the project and has helped to create stunning gardens with associated blocked paving for each property.

All three houses on the Morningside project were designed for the most discerning property owner and benefit from excellent transport links into London and a picture perfect setting.

“In terms of the external appearance of each property there is a slight variation across all three houses, however the overall design remained the same and they all look fantastic.

“Work on the project ran smoothly – without any major problems – and most importantly for us we finished this project on time and within budget.

“Everyone is very delighted that the project has been recognised by an NHBC Award as it really is a great achievement after all of our hard work.

“To win this award is important for CALA Homes, but it is also very important for me. This is the first time that I have won an award like this after coming close on a few occasions. This award is certainly one that I will remember.”