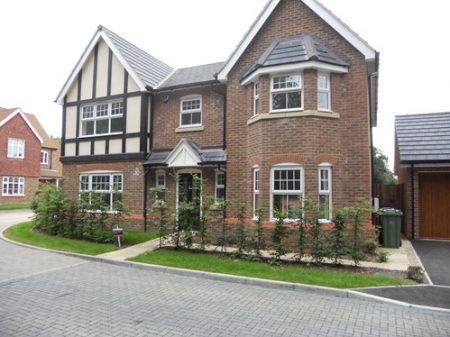 Leyton Gate is a brand new housing development currently under construction on Common Lane, in the village of Wilmington, Dartford.

Work began on the project in September 2011. Taylor Wimpey is the main contractor and F.C.S Architects is the architect.

All of the properties on the site are being built from brick and block construction, with double glazed windows and tiled roofs. As the site is being constructed next to a number of existing buildings, each unit has been designed to match the surrounding structures and includes a rustic finish.

Additional features of the site include double garages, fencing and paved areas.

Landscaping on the project also includes front and rear gardens, with a number of properties also benefitting from side gardens.

“From day one we have worked very hard on this site and everything has run according to programme, in fact I wish all my projects would run as smoothly as this.

“We used Plot One as our bench mark for Leyton Gate and then we worked our way out from there. We have maintained the high standards as we have continued to construct each building and we would love to build more houses like this in Wilmington. Leyton Gate is going to be a great site once it is complete.

“Of the 14 plots on the site, half are now complete and occupied and the remaining seven plots are at various stages of construction. Plot Six will be the next unit to be handed over and we are quite far along with Plots Seven, Eight and Nine.”

“Being involved with the construction of Leyton Gate is proving to be a very enjoyable experience for everyone involved. We are very happy with the work we’ve completed and the recognition by NHBC is an added extra.

“Our job satisfaction really is second to none and this project demonstrates exactly the high level of quality that we can achieve.”

Leyton Gate is due to reach completion in November 2012.