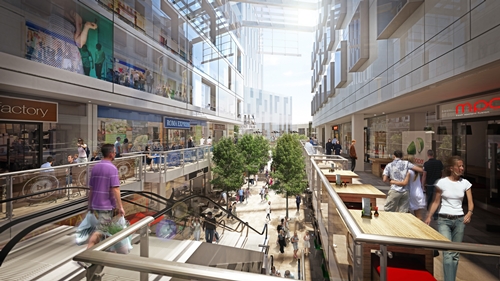 The former Lewis’s department store in Liverpool has long been regarded as part of the fabric of Liverpool life.

After hitting hard times, the iconic building in the city is being given a new lease of life as part of a £160 million development, and the project is nearing completion.

The redevelopment of Lewis’s, which has been part-funded by the European Regional Development Fund is part of Merepark’s Central Village scheme – a six-acre site which is set to become home to a mixture of retail, leisure and office space.

As part of the project, leading European hotel brand Adagio – a joint venture between the Accor and Pierre Vacances hospitality groups – will operate the UK’s first Adagio Aparthotel in half of the redeveloped former department store, with the other half set to become some 75,000 sq ft of Grade A office space.

Phase One of the multi-million pound project began in September 2010 and comprised a programme of soft strip works. Once work on Phase One had reached completion the second phase got underway involving the complete remodelling and redevelopment of the nine-storey building.

Phase Two includes the installation of the 126-bed apartment hotel and office space, and the refurbishment of lower level areas to create new retail and leisure spaces. In addition, work includes the cleaning of the Portland Stone facade, the formation of the innovative cut-through, providing more natural light and making the huge floor plates in the building more useable. It also included the installation of new windows and the refurbishment and replacement of existing shop fronts as well as new service cores and delivery areas.

Merepark Construction is the primary contractor on the mixed-use development, whilst Manchester-based practice Aedas is providing architectural services on the site. Futureserv Consulting Engineers Ltd is the mechanical and electrical consultant and SWF Engineering is the structural consultant.

Central Village is Liverpool city centre’s largest regeneration development taking place at the moment and will include, in addition to the Lewis’s elements of the build, a new plaza which will be formed between Liverpool Central Station and the Lewis’s Building, housing further retail and leisure units. The Boardwalk, as it is known, is anchored by Odeon and once work is complete on the project, the site will not only be a focal point of the city and once more regain its landmark status, but will also be the talk of the North West. 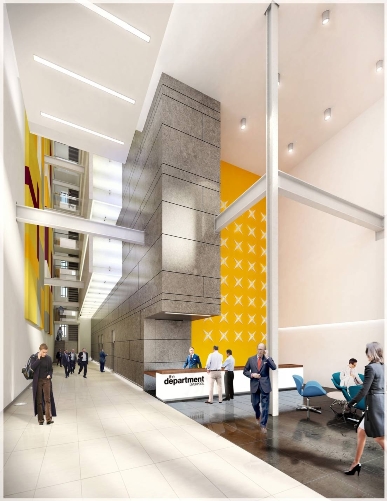 “The Lewis’s Building is grade II listed and is one of the most iconic structures in Liverpool. The building forms the gateway of the Central Village development and is an important part of the redevelopment works.

“Work on this scheme has been extremely challenging and complex but after several years of hard work and utilising our expertise in development, we are delighted to see both the hotel and offices taking shape in Lewis’s.

“Since the closure of the former department store in 2010, we have worked closely with English Heritage and Liverpool City Council’s conservation officer to make sure its unique character is preserved and blended properly with commercially successful uses to bring the building back to life. We’ve managed to successfully retain many of the existing features, including the famous and much loved Liverpool Resurgent statue, and the external façade.

“This is a major project for us. Merepark Construction is a vibrant, innovative construction company that was formed to compliment the vision of Merepark Project Management LLP.

“Even at this stage in the build we have between 150 and 200 people working on the site per day and work is progressing well.”

The redevelopment of the Lewis’s Building is the latest regeneration project in a long line in the city, which in 2008 was named European Capital of Culture. Developments such as Liverpool One, The Bluecoat Arts Centre, the Mersey Ferry Terminal and Lime Street Gateway have all played an important part in the collective resurgence of the city in recent years.

Set up in 1992, North West-based Merepark is a property development and investment company, specialising in a range of schemes from residential and retail developments, to hotels, leisure facilities and office spaces. Current investment tenants include NCP, Nando’s, Costa Coffee, Network Rail and Granada, as well as KFC and Footasylum, amongst others.

Working within the North West, Merepark has completed many successful schemes including the Quadrangle – a large mixed-use project situated within the heart of Manchester. The site spans over 450,000 sq ft and has a GDV in excess of £60 million.

For more information about Merepark and its current projects, please visit: www.merepark.co.uk.