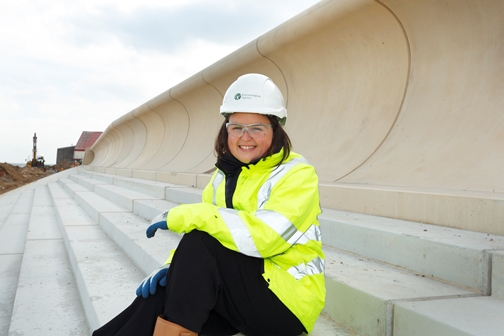 A £30 million scheme to create a 2.7 kilometre sea wall in Redcar is nearing completion.

The scheme is being implemented by the Environment Agency in order to reduce the risk of flooding to nearby houses and businesses. The new wall will replace an older sea wall which previously existed on the site and forms part of a much larger scheme to regenerate Redcar.

The Environment Agency has contributed £25.5 million to the scheme, with an additional £4.6 million of funding being provided by Redcar and Cleveland Borough Council. Birse Civil is the main contractor on the site.

Commenting on the project, Redcar and Cleveland Council’s Cabinet Member for the Environment and Rural Affairs, Councillor Christopher Massey, said:

“The flood defence scheme, due to be finished in spring 2013, will significantly reduce the risk of flooding and erosion along the Redcar coastline. With sea levels predicted to rise in the future I am sure the long term benefits of this scheme will far outweigh the short term inconvenience to residents and visitors to the town.”

“The new sea wall was the catalyst for the £75 million regeneration of Redcar, designed to stimulate economic growth in the area. As well as investing in the renewal of Redcar seafront, the Council are also delivering some significant schemes in the town, including the ‘Tuned In!’ youth facility, the ‘Palace Hub’, the Redcar Beacon and the Redcar Leisure & Community Heart.” 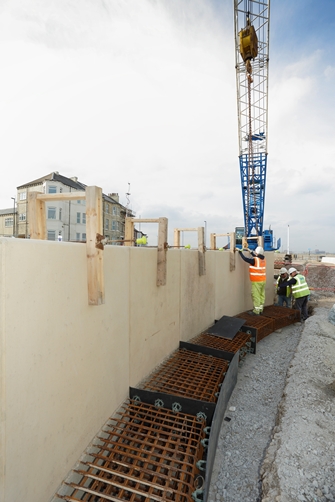 The regeneration of Redcar’s seafront is a key aim of the scheme, alongside reducing the risk of coastal flooding and erosion. Work began on the project in February 2011 and is currently on schedule to reach completion in spring 2013.

When work first started on the project one of the initial tasks was to drive 900 steel piles into the bedrock beneath the beach, in order to support the new sea wall. During this phase of works seafront artwork was removed, however this will be reinstated as part of the new promenade.

During the installation of the wall’s concrete blocks an eleven storey high crane – using vacuum lifting equipment – was employed to lower individually shaped pre-cast pieces into place. In total, 1,555 concrete pieces have been used to form the wall, with each weighing up to 28 tonnes.

The concrete blocks that form the wall have been specially designed and include a curved wave return section which will reduce the power of the waves, which in turn will reduce the risk of flooding to the town. Each block has been slotted into place like one life-size jigsaw puzzle.

Commenting on the project, Donna Robinson of the Environment Agency, said:

“When the Redcar scheme is complete it will reduce the risk of flooding to 978 homes and 209 businesses. We estimate that the sea will rise by around 85cm over the next 100 years, and without the wall a further 184 homes and 98 commercial properties would be at risk, along with key roads and underground utility services.”

“Works are now well advances and on schedule for completion in spring next year.” 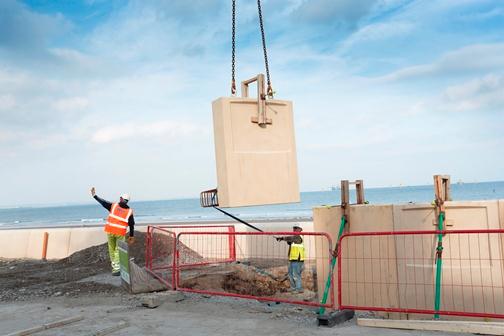 Once construction of the wall is complete there is still some work remaining on the scheme, including the reinstatement and improvement of the promenade and additional work on the Stray.

For more information on the progress of the new sea wall in Redcar, please visit: www.environment-agency.gov.uk.