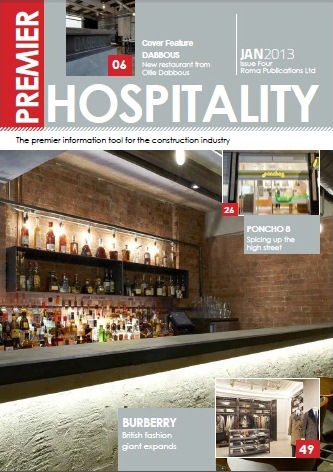 To kick off the New Year we have crammed this latest edition of Premier Hospitality with many fantastic features focusing on some of the UK’s best restaurant and hotel projects, including Dabbous and The Wood Norton. In addition, we also deal out an impressive refurbishment scheme which is currently being undertaken by gaming giant, Genting UK.

Dabbous is the first restaurant from celebrated chef Ollie Dabbous and since it opened in January 2012 it has been a runaway success. The 36-cover restaurant is split over two floors and comprises a ground floor restaurant and kitchen with a basement bar. Whilst the restaurant is the main focus of the site, the basement level provides a comfortable and relaxing getaway – designed for light bites, drinks and partying – and includes 49 additional covers. Work started on the project in August 2011, with Brinkworth as the interior designer and Syntec Projects Ltd as the main contractor.

Meanwhile, The Wood Norton is a 4* boutique hotel in Evesham, Worcestershire, which re-opened its doors in October 2012 following a £4 million refurbishment scheme. The hotel is housed within a Grade II Listed manor house and outbuildings and comprises 50 luxurious rooms and conference spaces, all set within 4,000 acres of breathtaking natural landscape.

Originally built as a hunting lodge in 1897 for the exiled French Duc d’Aumale, the prestigious site has accommodated many high profile guests and events over the years, including the wedding of Princess Louise of Orleans and Prince Charles of Bourbon in 1907.

And finally, as part of an extensive refurbishment and rebranding scheme, Genting UK is currently in the process of delivering a new and improved gaming experience which is set to wow old and new punters alike. The scheme – which focuses on Genting UK’s two brands Genting Casino and Genting Club – is being rolled out across the UK and affects every site within Genting UK’s portfolio. The three-year scheme is currently on track and to date has seen sites open in Manchester, Sheffield and Coventry, amongst others.

Now, with all that and more in one issue it’s time to roll back the pages of the latest Premier Hospitality and enjoy!