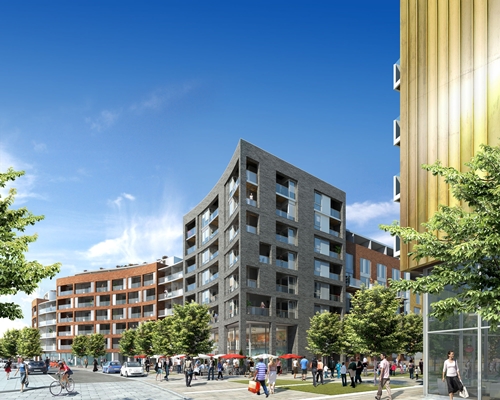 The £130 million Green Man Lane project comprises the construction of 853 flats along with associated landscaping works. The project, which is divided into six phases, is a joint venture between Rydon Construction and A2Dominion Housing Group Ltd and is being seen as an important step in revitalising a key area of Ealing.

“The Green Man Lane project is one of the last projects to receive Social Housing Grant which has been largely abolished by the current Government – though it is a commercially sustainable scheme with new build homes for sale subsidising the provision of homes for social rent at existing target rent levels.

“Green Man Lane is the first of Ealing’s projects to replace its most problematic large estates and as such has been the path finder for six other similar projects which are now on track.”

“The development partners were selected by the Council following an extensive process which had a considerable tenant and leaseholder involvement. The winning proposal being selected on a combination of financial viability, design and on-going management proposals.

“Ealing Council is selling the estate via a development agreement to a consortium of A2 Dominion Housing Association and house builder Rydon, whilst Brighton-based practice Conran & Partners is providing all architectural services on the scheme.”

Work began on the project in February 2011 and is currently scheduled to reach completion in 2019. The units are being constructed from a concrete framework, with some units incorporating a timber frame. 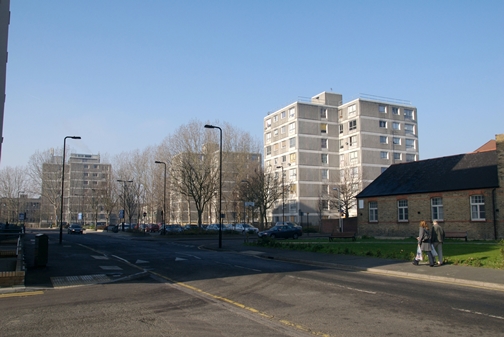 Currently work is taking place on Phase One of the project which comprises construction of 153 apartments, and once work is complete on this stage of the project Phase Two will get underway with a similar number of dwellings being constructed. All of the buildings will include a range of modern features, fixtures and fittings that will greatly transform the amenities that were previously available on the site.

As part of the programme of works Phase One also includes the construction of a Central Heating Plant (CHP) which will provide heat and power to all of the apartments across the scheme. Once all of the buildings are constructed each phase will be linked via communal gardens.

“The challenge for Conran & Partners is to create a place which houses twice as many people as on the old estate, but with a mixture of property and tenure types. Conran & Partners were selected by both the Council and tenants for the quality of their design proposals.

“The redevelopment has been designed to not just create a better physical place, but to revitalise the local high street area by changing the social mix and replacing an area that has a negative reputation with a thriving residential community.”

“As the existing estate was in such a bad state of disrepair, the former buildings which existed on the site are being demolished. Ealing Council gave permission for the area to be rebuilt in a more modern and contemporary style and once complete it will feature three different types of accommodation – rented, private and shared ownership.

“The site works on quite a complex decant strategy, so all of the work that we are conducting has to be completed within certain timeframes so that we can move the existing residents to their new homes. Once each phase is delivered we will be decanting residents from their previous dwellings into their new homes and then demolition work will take place on the older buildings.

“We will continue to demolish buildings after each phase is completed and during the entirety of the scheme we are keeping all residents up to date so they are aware of what is taking place around them. To facilitate this important part of the project we have employed a Resident Liaison Officer (RLO) who is working with A2Dominion to meet the requirements of the existing residents.” 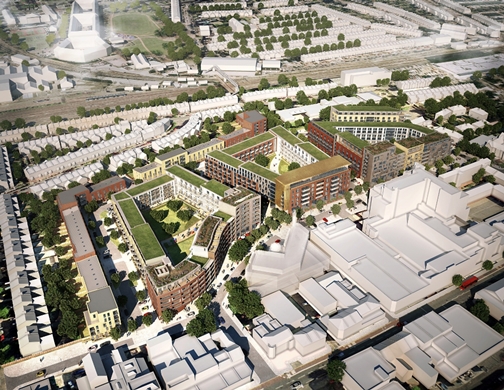 “For the local community the Green Man Lane project is very important. Some of the families who live in the area are in need of housing and the quality of the housing that was previously on offer was not quite up to current standards. With this scheme these residents can now benefit from a fully modernised, energy efficient property which is wonderful.

“The length of the programme of works, plus the importance of the project adds up to a major scheme for us and we are very proud to be involved with a development which will change the face of Ealing.”

“The Green Man Lane project is a great scheme to be involved with and it allows us to make use of the skills which we have built up over the years. We have worked with Rydon Construction on many schemes in the past and it is good to be working with them once again on this project.”