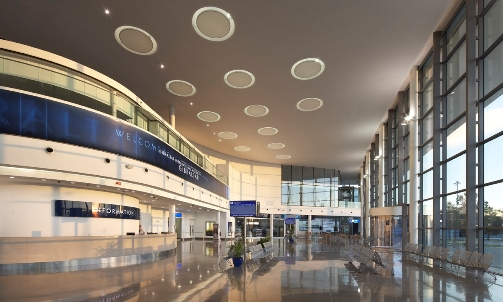 The new Gibraltar Air Terminal has opened to the public.

The Terminal replaces an old facility and cost around €84 million, with funding coming from the government of Gibraltar. The Terminal has two storeys- a total floor area of 19,700 sq m- and the development includes four code C aircraft stands and one code D aircraft stand. There is also additional parking for general aviation.

There has also been some landscaping at the entrance to the main concourse and close to the exit from the boarding gates. 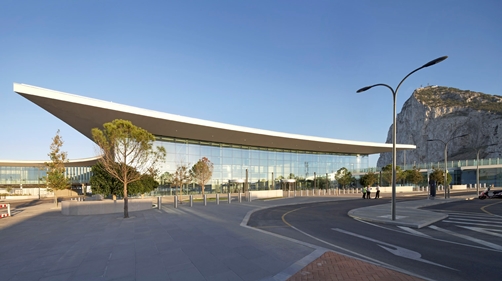 Planning permission was granted in 2007 and the Terminal was completed in April 2012, becoming fully operational on 26 September 2012.

“The Air Terminal in Gibraltar has always been very important to our community due to our strong ties with the United Kingdom.

“Our growth as a finance centre and in the on-line betting industry results is reliant on good air communications which can now be developed with the addition of the new facility.

“In addition, many Gibraltarians do their further education in the UK, or travel there for specialised medical treatment so the terminal will always play an important part in our community.” 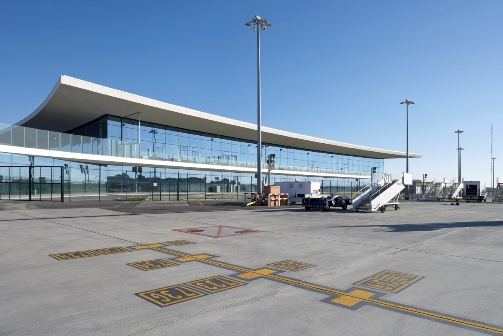 Aquagib Ltd is principally engaged in the provision of water supplies to the local community under a License Agreement with the Government of Gibraltar.

The water distribution system comprises two networks, one for the supply of potable water and

the other for the supply of seawater. Fresh water is produced by desalination made potable,

stored and conveyed to consumers via a gravity distribution system and subsequently sold through individually metered connections.

Raw seawater resources are pumped into storage reservoirs strategically located throughout the Rock’s periphery in order to be able to supply the ‘consumer’ via a gravity fed Distribution system. Seawater is used for fire fighting, street cleaning, flushing of sewers, flushing of toilets and other sanitary purposes where the use of potable water is not essential.

Aquagib Ltd also has contractual responsibility to operate and maintain sewage pumping stations and their associated rising mains and for the reading and billing of electrical consumption for the Gibraltar Electrical Authority.

“The company works on all public and private sector driven projects which have water supply implications for the water distribution network. As a water utility provider we are governed by the Public Health Act and Water rules and comply with the regulations on behalf of our client.

“Aquagib’s primary involvement on the project was to ensure that the designed water and sewage pumping infrastructure supplies for Gibraltar Airport were installed and tested in accordance to specification by the contractor, in order that these assets can later be added onto the Aquagib asset register and form part of the network.

“The company’s secondary involvement was to ensure that all existing pipework diversions within the build zone were carried out by the contractor in compliance with specification and recorded for future as built reference.

“Our Company prides itself on its mission statement which encompasses key steps to ensure we achieve our vision by ensuring a customer focus which exceeds expectations with our level of service.”