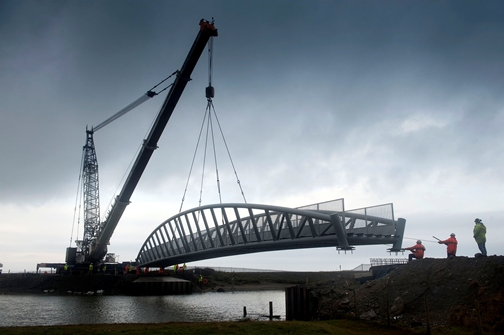 Civil engineers Jones Bros have overseen the installation of the biggest Vierendeel Bridge in Britain.

The firm lifted the 50m steel structure in Tywyn, North Wales, allowing the local community to cross the Afon Dysynni River for the first time in 40 years – previously residents had been forced to make an eight-mile diversion to cross.

The footbridge will also span a missing link in the Welsh Coastal Path project, a tourism scheme to create an 870 mile path for walkers, cyclists and horse riders around the Welsh coastline.

“I’m very proud to see that the work is starting and very much hope that the new bridge will enhance people’s enjoyment of the coast here in Gwynedd.”

Hefin Lloyd-Davies, who project managed the erection of the new bridge, said:

“We are delighted to have been awarded this contract to develop the Wales coastal pathway, which is an important project that the town of Tywyn fully deserves and it will open up the area.

“We have a great track record in Tywyn, as we have had numerous schemes in the town and have developed a really positive relationship with the townsfolk, businesspeople, local politicians and Gwynedd Council who we are working closely with.” 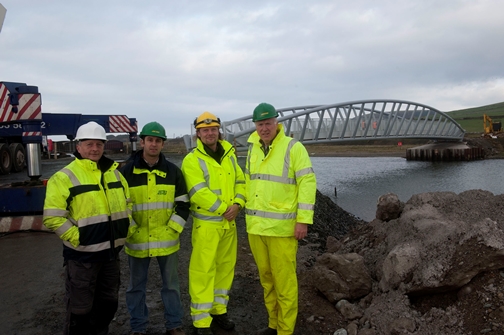 The project builds on the special relationship Jones Bros have with the village’s residents, having completed work on the Tywyn Coastal Defence Scheme in the 2010.

Further work on the four-part 3.5m wide construction, funded by Gwynedd Council and transport consortium TRACC (Trafnidiaeth Canolbarth Cymru), which features a hardwood and rubber decked surface, will take place on site over the next month ahead of an estimated March completion date.