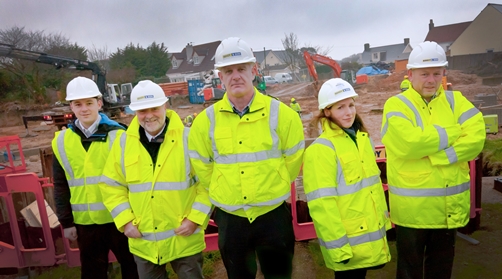 The new employees have been added to the company’s surveying and project management teams and will help Rihoy & Son cope with an increase in business.

“Rihoy & Son’s reputation has been built on delivering the highest level of service but we can only do that with the right teams in place. By strengthening our surveying and project management teams, we can ensure we deliver our current, and future, projects on time, on budget and to the client’s expectations.”

Rihoy & Son is currently working on the redevelopment of Bouet, on the former Randall’s Brewery site, which will become a residential development known as One St Julian’s Avenue, as well as Le Grand Courtil, which will provide extra care units for the elderly. New team members Marcus Gudgeon and Gordon Jones are involved with One St Julian’s Avenue, whilst Anne-Marie Campbell is working on Le Grand Courtil.

Marcus Gudgeon, brings with him over 25 years of experience to his new role, having previously worked in South Africa, Swaziland, Mozambique, Germany and across the UK. Commenting on his new appointment, Marcus said:

“I was looking for a new challenge and since I moved to Guernsey in 2006, I have watched Rihoy & Son’s progress in the industry with interest. When I made the decision to leave my previous employer, they were the logical choice and I am thoroughly enjoying looking after the company’s commercial interests on the One St Julian’s Avenue residential development. This project requires particular commercial skills due to the nature of the contractual arrangements.”

“One St Julian’s Avenue is a very restricted site with the footprint of the new building covering virtually the whole of the old brewery area. Deliveries are paramount as there is very little storage space and most operations will be dependent upon the tower crane as the prime mover. The number of lifting operations on One St Julian’s Avenue means the safety of all site personnel will be at the forefront of our thinking when planning the various phases of the project.”

Scottish-born, Anne-Marie Campbell, has moved to Guernsey to work on the Le Grand Courtil project. As a chartered surveyor, Anne-Marie brings with her 20 years of experience in both surveying and facilities and has worked in America, Canada, England and Scotland.

“Rihoy & Son is a family company and that was very important to me. They have an excellent reputation, provide me with the challenges which I am looking for and allow me to use the experience I have gained over the last 20 years.”