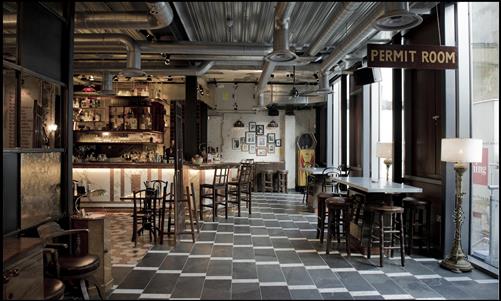 Set in the trendy surroundings of vibrant Shoreditch we find Dishoom – the Irani style café is the second to hit the capital in recent years, the other being in Covent Garden.

From menu, to internal design the café looks every bit the Irani café which you might find on a crowded Bombay street. The authentic design is down to Russell Sage Studio, the designers of which were flown out to Bombay in order to get a feel for the architecture and the café culture.

“We went out to Bombay for six days during the design process. Whilst we were there one of the designers stayed in the Bombay Yacht Club, which we took quite a lot of inspiration from.

“It was a very productive trip; on the day we arrived we ventured straight out into the city and went to probably around 20 Irani cafes and there’s only about 30 left in the city! So we certainly got a good feel for what Dishoom would have to reflect.”

Sara went on to reveal some of the design features that transformed this disused East London building into a vibrant café. She said:

“We copied the famous Leopold’s column when designing Dishoom- Leopold’s being one of the oldest Irani cafés still going in Bombay.

“We also looked at the traditional materials used in the indigenous cafés like the marble table tops, the slate floors with white marble inlays, the antiqued mirrored wall panels in dark wood frames and the aged timber.

“The floor was actually taken from an original Irani café and is in two parts, one side is a mixture of slate and marble whilst the other is patterned. The staircase surround was inspired by a huge shop called ‘Bungalo 8’ where we used 70s-style patterned glass panels.

“Whilst we wanted to reflect the Bombay heritage of the café we also wanted to incorporate a warehouse aesthetic which would pay homage to the current East London trend of re-using older buildings for new functions. The overall impression is a unique blend of Bombay and the trendy, cool streets of Shoreditch.” 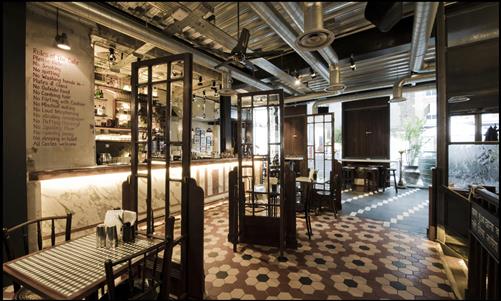 The venue opened its doors in October last year and has since received a great reception from locals and critics alike, for food and design.

On the food front – expect all the favorites from the original Dishoom in Covent Garden with a few additions. Their house special will be Lamb Raan – a whole leg of lamb marinated in chilli, garlic and ginger, braised overnight with spices and then flame grilled. They’ll then serve that tender meat in a bun – as the Lamb Raan Bun – with Dishoom slaw and Sali crisps.

Moving forward there are plans to expand the Shoeditch venue following on from a surge in visitors.

“Since Dishoom opened there has been great feedback and because of the success Russell Sage has been asked to do an outdoor space which will be fully enclosed, adding to the 230 covers that the restaurant already has. This extension should be opening in April 2013.”

For more information on Dishoom or to have a gander at their mouthwatering menu, please visit: www.dishoom.com.

Established since 1989, the company has a wealth of expertise and experience providing total solutions for many blue chip clients, from high end architectural staircases, glass balustrades, sheet metalwork to plant room walkways.

STG can provide full design/inception with in-house draughtsman through to manufacture, execution and installation.

Previously the company has carried out works on Gordon Ramsay’s restaurant, Bread Street Kitchen and also the 02 in Slough. Most recently STG fitted the main feature staircase and surrounding cladding at the new trendy Dishoom restaurant in central London.

When asked what the company STG prides itself on, Director, Michael Stevens said:

“We pride ourselves on providing a pro active, total end to end solution, with a dedicated team of experts including an assigned Project Director to manage the full project lifecycle to ensure that we meet our client’s requirements and deliverables, offering a true business partnering approach.

“Through adopting this style of management, it ensures that we enjoy long and prosperous relationships with all of our clients, many of which we have worked with for a number of years and have gained preferred supplier status.”

Noble Russell Ltd is a bespoke furniture maker, specialising in the design and supply of contemporary contract furniture for the leisure and hospitality industry. The company celebrates its 20th anniversary this year and over the past twenty years has provided furniture to a number of prestigious projects, including the National Gallery dining room; the Jubilee Tea Rooms in Fortnum & Mason; and Gordon Ramsay’s Bread Street Kitchen.

“Working on projects such as Dishoom is very important to us at Noble Russell Ltd. They are great projects to be a part of and they allow us to showcase what we do best.”

“We are a design-led company, supplying high quality furniture to many leading names in the industry and we pride ourselves in the excellent service that we provide to our clients.”